It would be recalled that Jonathan last year January recently signed into law a bill prohibiting same sex marriage, saying that anybody caught in such act would be jailed for fourteen years.

Reacting to the verdict, Fani-Kayode, otherwise know as FFK took to his Facebook page to share his thoughts.

FFK said, “Boko Haram suicide bombers have struck again in Maiduguri killing dozens of people. Instead of fighting the war against terror, GEJ is busy locking up gays. Shame on him.”

When a fan accused him of supporting homosexuality, FFK said:

“I am not gay and I do not approve of homosexual behaviour. However I think it is wrong to send people to jail based on their sexual preferences and sexuality. It is known as persecution of minority rights and its is reprehensible. 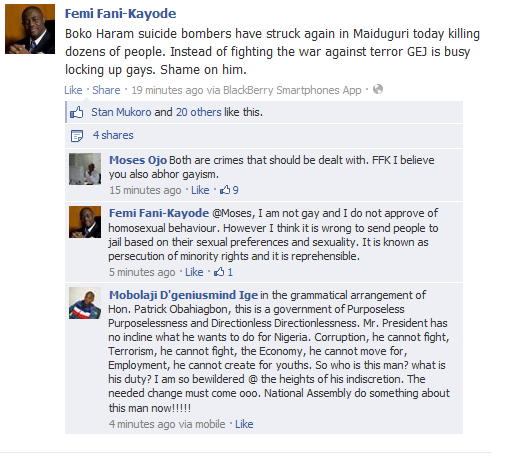 This news was rescued in light of the queer tirades from the same person against the opposition candidate, Muhammadu Buhari.