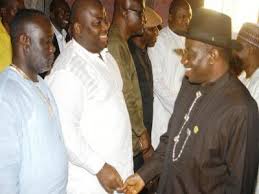 The Itsekiris in Delta state have accused President Goodluck Jonathan of encouraging Ijaw agenda to exterminate them following the violent threats from Ijaws of Gbaramatu Kingdom, Warri South West Area of Delta state which aborted the Tuesday’s scheduled groundbreaking ceremony for the $16bn Ogidigben EPZ project by the President.

In a briefing yesterday in Warri by Itsekiri Leaders of Thought, the ethnic group in Delta said they were ready to approach the United Nations to seek secession and opt for protection under the United Kingdom or United States in line with treaties signed with these foreign powers long before Nigeria’s independence which they claim have not been abrogated.

The decision read by Secretary to the ILT, Edward Ekpoko noted, “Itsekiri and other well meaning Nigerians are surprised at the failure of President Goodluck Jonathan to commission the groundbreaking for the EPZ at Ogidigben, Ugborodo in Warri South West Local Government area due to threats of Ijaw militants mostly of Gbaramatu kingdom.

“The EPZ is completely cited in Ogidigben, an Itsekiri town. The closest Ijaw enclave lying to the South, Yokiri, is about 14km from Ogidigben. The other town to the North is Kpokpo. This Kpokpo has no geographical contiguity with Ogidigben.’’.

Pa J. O.S Ayomike, Chairman of the ILT, in their remarks said various court injunctions by courts of competent jurisdiction held on the land ownership tussle in the area support the fact that the entire land space currently occupied by the Ijaw of Gbaramatu is owned by Itsekiris of Ugborodo.

“President Jonathan’s refusal to perform the groundbreaking ceremony of the project as fixed for Friday was a show of cowardice unexpected of his office which should stand for the rule of law. He has shown that he has joined the Ijaw militants in building fences among the ethnic nationalities in the Niger Delta and Nigeria.

“Jonathan should know that Itsekiri the world over will go to the UN to request for secession if Jonathan and Ijaw want to pursue the extermination of the Itsekiri people. We will ask for the protection of the Britain and USA and the United Nations”, Ayomike, an octogenarian screamed.

Ekpoko added that, “Jonathan is pursuing an Ijaw agenda. We will resist it and will never be intimidated by threats of war and genocide against the Itsekiri.”

The Itsekiri leaders also took a swipe at Governor Emmanuel Uduaghan, calling him to resign as Governor following his failed boast that nobody can stop Jonathan from coming for the EPZ groundbreaking.

Ayomike said, “Jonathan has been stopped by the Ijaw. They have belittled Uduaghan . Uduaghan boasted that he was governor and that nobody could stop the president from coming. Now that his boasting did not yield any result, he should resign like President Nixon did.

“Jonathan has been intimidated by the militants, and the Ijaws have grown in fame and importance so they can control everything, including the president of Nigeria.’’.

Meanwhile, the Ijaws of Gbaramatu speaking through Paul Bebenimibo have maintained their position to see that the EPZ never materialises until Gbaramatu stakes are as defineds.

Bebenimibo in a phone reaction yesterday said, “Gbaramatu Ijaws are not at war with their Itsekiri neighbors. Our leaders are simply saying what is good for the goose is good for the gander. We own a large proportion of the EPZ. We do not deserve to be shut out. Equity is the password to a successful EPZ. Equity begets peace. You cannot talk peace in the atmosphere of injustice and oppression.”