NewsRescue– Over the weekend, Ijaw elders from across the land held an emergency one day meeting in Bayelsa. 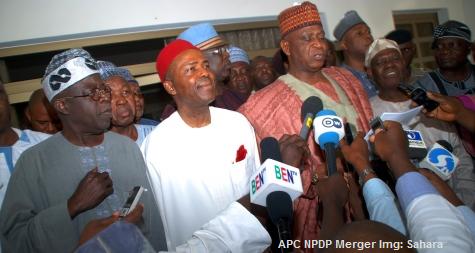 The meeting which took place Sunday 30th November, comes following dwindling support for the president with most recently an out-flux of party members to the opposition APC party, referenced by party chairman Bamanga Tukur as a ‘coup de tat.’

The emergency meeting was also staged after a prominent Ijaw son and rabble-rouser, Dokubo Asari was jailed in Benin republic. Nigeria is suffering from increasing and provoked ethnicization of the polity as a result of frustrations with the state of the nation.

The meeting took place in the government house. Details according to PointBlank news are below.

A one day meeting of Ijaw elders and leaders of thought took place in Government House, Yenagoa on Sunday 30th November 2013. The meeting which was presided over by the Chairman of Ijaw National Conference Pa E. K. Clark , had in attendance over 200 leaders of thought of Ijaw extraction drawn from Akwa Ibom, Bayelsa, Delta, Edo, Rivers and Ondo States.

2.      The Consultative Meeting expressed great grief over the demise of the leader of the Ijaw National Congress (INC), late Senator Dr. Tari Sekibo, Odoabaji the Seventh  . The meeting observed one minute silence in honour of the INC leader.

3.      The discussion focused on several issues of interest and concern to the people of Ijaw ethnic nationality and Nigeria in general. Amongst other things these include;

i.       The state of the Nigerian Nation dwelling on national security, economic and social development.

ii.      Political developments in Nigeria especially the National Dialogue, peace and stability and the move towards 2015 elections.

4.      After exhaustive deliberations, the consultative meeting noted as follows;
i.       That the Transformation Agenda of the Federal Government led by President Goodluck Jonathan is making steady progress in various areas. . These include rehabilitation of roads, railways and airports nationwide; Power sector reforms; The completion of NIPP projects; Job creation through SURE P and YouWin; Massive healthcare reform through upgrading and modernatization of Teaching Hospitals and Federal Medical Centres; Agricultural Transformation including enhanced production of rice and staples; Unprecedented Investment Inflow and so on.

ii.      That President Goodluck Ebele Jonathan has brought Nigeria to an uncommon level of International respect, acceptance and prestige as reflected in outcome of recent visits to South Africa, Kenya, China, United States, Israel , and in Nigeria’s recent election into the United Nations Security Council.

iv.     That the decision of the Federal Government to create a platform for discussion, dialogue and brotherly exchange of ideas underscores its commitment to addressing the yearnings of its people is commendable.

v.      That the determination of the Federal Government to continue to uphold he rule of law, Due process and constitutionalism in the nations body polity, especially in the match towards 2015 underscores its commitment towards building on the globally acclaimed success and transparency in the 2011 elections and subsequent polls.

5.      After elaborate discussions, the Consultative Meeting affirmed and resolved as follows;

i. Expresses its vote of confidence in President Goodluck Ebele Jonathan for his uncommon commitment to the progress, peace, harmony and stability of the country.

ii. Appreciate the support given to Mr. President by other ethnic nationalities in Nigeria.

iii. Calls on President Goodluck Ebele Jonathan to remain steadfast in his labour and his toil and service to this great country.

iv.  Calls on all Nigerians to work with the Federal Government to build a Nigerian Nation in peace and progress.

v. Condemns the various voices of distraction aimed at thwarting the lofty achievements of the Federal Government