The Press Release, authored by a supposed non-Nigerian with the name Wendell Simlin, provided timeliness connecting the suspension of Sanusi and the most recent killing and kidnap of citizens in Borno and Yobe states.

Read the press statement below:

In the wake of the saga involving the suspended Governor of the Central Bank of Nigeria, there has been an increase in the tempo of terrorist activities carried out by the Islamic Terrorist sect, Boko Haram.

Taken together with some historical facts, there is a strong case that this increase in tempo and other activities are not coincidental.

The following Timelines may throw some light on the likely linkages;

It is a historical fact that Malam Sanusi Lamido Sanusi was implicated in the Gideon Akaluka beheading affair of 1995 and was subsequently arrested in Kano and detained by the Abacha administration in Sokoto, Sokoto State.

Sanusi was released after the intervention of (amongst others) Alhaji Umaru Abdul Mutallab.

Alhaji Mutallab used his influence to place Sanusi comfortably in the banking sector beginning with the United Bank for Africa from where he moved to First Bank where he (Mutallab) was chairman.

Malam Sanusi rose within the ranks, aided by his relationship with Mutallab, until he was nominated by President Yar’adua and confirmed by the senate as the Governor of the CBN in 2009.

It is pertinent to note two incidences that cannot be coincidences. The son of Alhaji Umaru Abdul Mutallab (Farouk Abdul Mutallab) eventually entered into infamy when he was arrested and tried for attempting to detonate an under wear bomb on a Northwest Airlines flight into America. Farouk Abdul Mutallab became radicalized after he had gone to study Sharia and Islamic studies in Yemen in 2009.

This was exactly the same trajectory earlier taken by Sanusi Lamido Sanusi who schooled at the International University of Africa in Khartoum, Sudan in the mid 1990s while Osama Bin Laden was also a resident of the city.

Alhaji Umaru Abdul Mutallab appears to be a recurring decimal in the life of Sanusi and the unifying factor appears to be their passion for an Islamic world order. For example, one of Sanusi’s first act as Central Bank Governor was to begin the push for Islamic banking which culminated in the establishment of the first Islamic bank in Nigeria, Jaiz Bank. Alhaji Umaru Abdul Mutallab is the Managing Director of this bank.

Given the quantum of funds that were appropriated by the Sanusi led CBN on non banking related activities and donations, and the strong desire that he and Alhaji Umaru Abdul Mutallab have for proselytizing Islam as well as their circumstantial links to terror (Sanusi via Gideon Akaluka and Mutallab via his son) it is not such a leap for them to facilitate the activities of terrorists.

Find the evidence below:

NewsRescue ran an analysis of the text of the media release with http://www.hackerfactor.com/

The text was detected as male, ‘weak male,’ and not female. 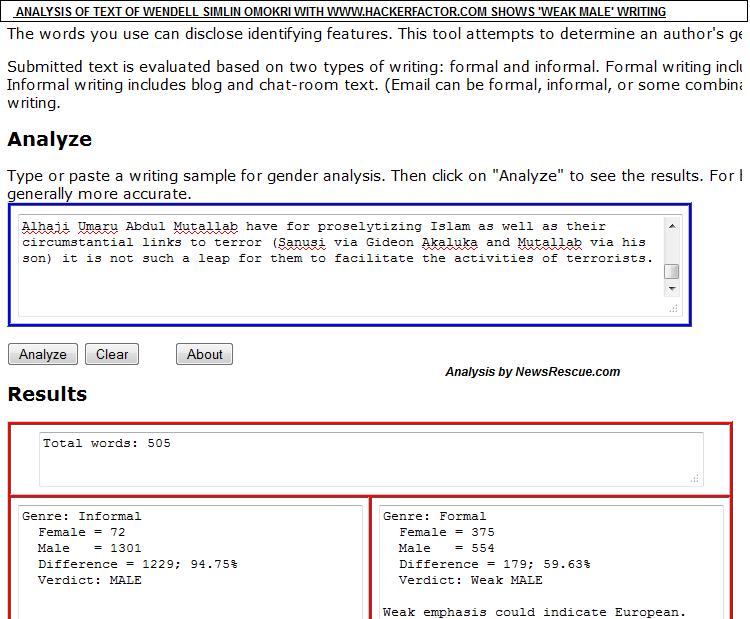 This scandal, the latest in a series of ethical and corruption issues rocking the Jonathan administration, set Twitter on fire today. Outraged Nigerians called for Mr. Omokri’s sack. The timing of Mr. Omokri’s fraudulent act is particularly insensitive, with many commentators questioning why a member of President Jonathan’s inner circle would seek to capitalize on the blood of slaughtered innocent children by forging documents to implicate a perceived “enemy” of the Jonathan administration.

Mr. Omokri’s callous forgery began to unfold today at about 11.54 a.m. (Nigerian time) when certain media outlets and editors received an email from one Wendell Simlin ([email protected]) with the headline “Increased Tempo of Boko Haram/Terrorist Activity in the Wake of the Sanusi Saga”.

The email included a Word document which sought to use spurious circumstantial evidence laced with a heavy dose of innuendo to suggest that the renewed Boko Haram attacks in the Northeast were linked to Mr. Sanusi’s recent suspension as CBN governor.

Several tech-savvy individuals tried to ascertain who the author was and why such critical information was emerging from a “strange” and unknown name. The investigations turned up the following evidence:

1. They found a Wendell Simlin on Facebook with only one photo. That photo had Mr. Reno Omokri in it. While the photo has since been deleted, a screenshot was taken before the deletion and it is hereby published.

4. But the most damning evidence was found in the   Word document “Simlin” sent out as news, which had the author’s name as Reno Omokri. Those who received the original email have also done a check and confirmed that Mr. Omokri’s name was on it. Investigations further confirmed the person who saved and edited the document to be Mr. Omokri. Both screenshots are reproduced here.

Prior to today’s development, Mr. Omokri had already developed a reputation for a pattern of using a variety of identities (aliases and screen names) on the Internet to attack and smear the names of perceived enemies of Mr. Jonathan.

Analysts say that, even if Mr. Omokri was acting alone, the fact that he is officially a Special Assistant to the President implicates the Presidency in his callous effort to exploit a shocking tragedy in order to smear the former CBN Governor. The unmasking of Mr. Omokri as the author and mastermind of the grave forgery is likely to dent the Presidency as it sends the message that Mr. Jonathan may secretly encourage the very dirty tactics to which he publicly objects.