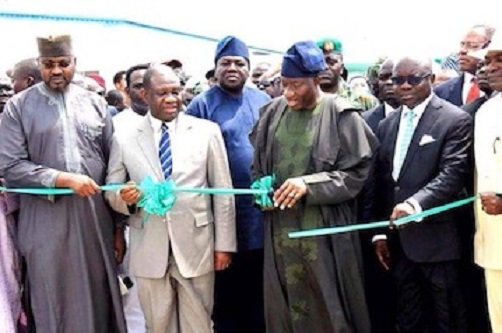 President Goodluck Jonathan Thursday, re-commissioned the Olorunsogo Power Plant in Ogun State that had earlier been commissioned by former president Olusegun Obasanjo and has been in operation since 2007.

The Obasanjo administration actually built many of the gas-powered plants across the country, or awarded the contracts for them. They are now being commissioned by the Jonathan administration. The Olorunsogo plant, not far away from the industrial complex of Sango-Ota Farm, Ewekoro Cement and the Obasanjo Farms, was among the plants that were ready before Obasanjo left office in May 2007. And he cut the ceremonial tape to declare it open.

The plant, with eight turbines, could not produce much power, because there of inadequate gas supply.

Thanks to Okeke Godwin Iyke, we now publish the photograph of the former president commissioning the plant.

See photo of Obasanjo commissioning the project below: