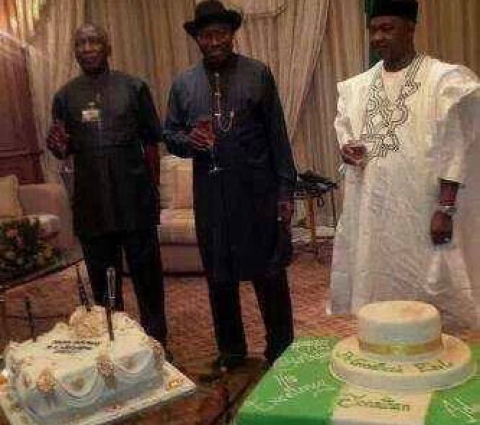 NewsRescue- It can be recalled that at the AU 50th anniversary in Ethiopia earlier this year, President Jonathan was nowhere to be found when he was called upon for his presentation. Similarly at the recently concluded International Investors summit in UK, President Jonathan suddenly checked in to the hospital the morning of the event with ‘acute abdomen.’ SaharaReportes reported that this was related to his drinking at his birthday celebration in his hotel. The Nigerian President did not also feature in most international pictures of the event. See. Nigeria a nation that invested so much in the Mandela and South Africa Apartheid fight has been slighted by this occurrence.

The Nigerian president is not among the leaders that would give tribute.

Despite leaving Nigeria early for the funeral of late South African leader, Nelson Mandela, President Goodluck Jonathan has been snubbed by the South African authorities at the State Memorial Service of the anti-apartheid leader.

An official release of programmes during the memorial service shows that the Nigerian president was missing on the list of world leaders billed to give tributes.

Other leaders billed to give tributes are the United Nations Secretary-General, Ban Ki-Moon; and the African Union Commission Chair, Nkosazana Dlamini Zuma.

Although Mr. Jonathan is not the only head of state that would not give tribute- there are about 90 heads of state attending the funeral — the apparent snub handed the Nigerian leader is more apparent given Nigeria’s position as arguably sub-saharan Africa’s most influential nation.

It also appears to rubbish the enormous sacrifice and contribution by Nigeria to bring an end to apartheid in South Africa at a time when Western governments pussyfooted on pressuring the apartheid government to renounce its policy of segregation and its brutal abuses of the rights  of the black majority.

Some Western governments including the U.S., whose president has now been penciled to speak at the event, even at the time designated the ruling African National Congress (ANC) as a terrorist organisation, and Mr. Mandela a terrorist.

The refusal of the South African authorities to allow Nigeria’s president speak was also highlighted by the Lagos State Governor, Babatunde Fashola, in a chat with journalists on Monday.

“The people, who collaborated with the government that enthroned apartheid at that time, are the people that are paying the biggest tributes now. But I ask myself: is this not the time for deep reflection? I doubt if any African country expended as much time, as much money and as much commitment as the Nigerian Government.

“Apart from scholarship given to South Africans, I remember President Yar’Adua met Thabo Mbeki in South Africa and he was telling me about their relationship, which he said dated back to when Mbeki used to come to Zaria for student exchange programme. I remember we did not go for Commonwealth Games because of South Africa. I remember we took drastic measures against the foreign collaborators of apartheid regime and nationalised assets.”

However, Lagos-based lawyer, Jiti Ogunye, says Nigerian politicians are to be blame for the pedestrian level the country presently occupies in the international community.

He says the disrespect Nigeria currently gets from the international community is a result of years of misrule and corruption by the country’s politicians.

“Nigeria has lost its social, political and economic glory domestically and that glory that is lost cannot be recovered at Mandela’s funeral,” he said.

“While Nigeria officialdom maybe in a state of discomfiture by the non-recognition of Nigeria in the protocol of the funeral, the point is that it is not what Nigeria did for South Africa or for Angola or for any of the frontline states like Namibia that Nigeria will be remembered.

“Nigerian young people go overseas and become criminals the way we are criminals in our own country. People leave the shores of Nigeria to be criminals outside our shores. Right from the time they leave Nigeria they’re going overseas to be criminals. We are exporting blue-collar crimes and Yahoo Yahoo to all sorts of countries, to Malaysia and are we blaming those countries for our own woes?

“Those who may be belly-aching about not being giving recognition by the organisers of the funeral of Mandela should know that while they may not be regarded, the South African people regard Nigeria. Go and read all the accounts, the role that is played by Nigerians is recognised in all those imperishable works and this cannot be obliterated by this treatment that is accorded to Nigerian officials that we at home have contempt for.

“If we are disgraced outside, that disgrace didn’t come from outside. That disgrace came from within because we have disgraced and debased ourselves. Do you expect anybody to take you seriously when what your rulers are known for is taking your money and cashing them away? In fact it s better they are humiliated outside so that they can come back home and be serious. If bad people are accorded all the respect and dignity that good people should be accorded how do you think they will change.”