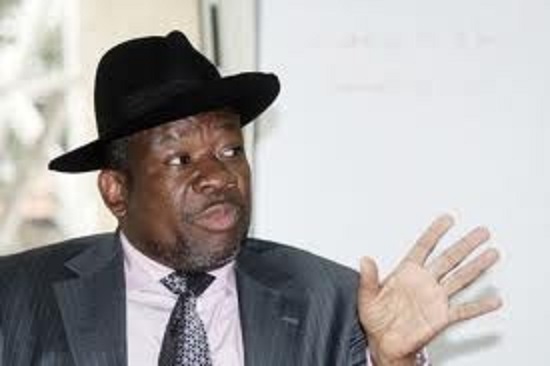 Oronto Douglas, the Special Adviser to President Goodluck Jonathan on Research, Documentation and Strategy, is dead.

Mr. Douglas, 49, a presidency source said, passed on at the State House clinic at 4:58 a.m. Thursday.

The real cause of his death is unknown at this time, but the presidential adviser is said to have managed a terminal illness for sometime, and had, from time to time, sought treatment abroad for prolonged periods.

Born 1966, Mr. Douglas is regularly described as one of Mr. Jonathan’s most brilliant and influential aides, documenting the President’s achievements and legacies, and helping coordinate parallel media and campaign strategies for the presidency.

“He was one of those who had the most far-reaching influence on President Jonathan,” a presidential aide said.

NewsRescue–Oronto Douglas is also remembered for being one of those accused by MEND leader Henry Okah as being Jonathan’s proxies in delivering messages for terror-related plans to divide and rule Nigeria, including the alleged plot for Okah to blame the Abuja MEND bombing on ‘northern elements.’ Douglas was also responsible for persuading the appointment of oil goddess Diezani Alison-Madueke, one of the most corrupt ministers in Nigeria’s history to head the oil ministry.

74. President Goodluck Jonathan used his closest advisor Mr Oronto Douglas or the Minister for Niger Delta Mr Godsday Orubebe to keep in touch with me.

78. During my meeting with Mr Douglas, he informed me that the Northern region of Nigeria was attempting to prevent President Goodluck Jonathan from becoming the president of Nigeria and required my assistance.

79. During the evening of 4 April 2010, I received a call from Mr Douglas who informed me that a certain Ms Diezani Allison-Madueke desperately required speaking to me and requested him for my phone number.

80. Mr Douglas explained to me that she required my assistance in persuading President Goodluck Jonathan to appoint her as Minister for Petroleum.

82. During the evening of 4 April 2012 and the morning of 5 April 2010, I received approximately twenty calls from Ms Madueke explaining that she was competing for the post of Minister of Petroleum with the now Minister of Foreign Affairs Mr Odien Ajumogobia and required my assistance to tip the scales in her favour.

83. Ms Madueke requested that I put in a good word for her with President Goodluck Jonathan whom she said had asked to speak to me.

84. At the time of her first call, President Goodluck Jonathan was busy and she continuously called or sent text messages to update me on the Mr Jonathan’s availability.

PremiumTimes continues-A lawyer and committed environmentalist, Mr. Douglas was a commissioner for information in Bayelsa and was a delegate from the state for the 2005 National Political Reform Conference organised by the Olusegun Obasanjo administration.

He emerged one of the shinning stars of that conference as the Niger Delta region pushed for improved revenue allocation to the area to mitigate the effect of oil exploitation.

Mr. Douglas’ last Facebook post was on March 8 when he shared the video of Mr. Jonathan’s interview with foreign news channel, Al-Jazeera, in the runup to the March 28 presidential election.

“The Conviction with which President Jonathan says “I Will Not Lose the Election’ is compelling almost to the point of prophesy. This is a President well connected to his people,” he wrote in what appears his analysis of Mr. Jonathan’s performance in the interview.

Below is how Mr. Douglas described himself on his Facebook page.

Oronto Douglas; is a leading human rights attorney in Nigeria, and served as one of the lawyers on the defense team for the Ogoni leader Ken Saro Wiwa, who was executed by Nigeria’s military rulers in 1995. Douglas co- founded Africa’s foremost environmental movement, the Environmental Rights Action/Friends of the Earth Nigeria and has served in the board of several non profit organizations within and outside Nigeria. Though he has been arrested and tortured by successive military regimes, he continues to work for and speak out on issues of social justice in a corporate- military state.

He was the first Niger Delta activist to be hosted by a serving American President – he presented the Niger-Delta struggle at the White House to President Bill Clinton. Douglas who advises the Nigerian Vice President on strategic issues of community and the environment, is a fellow of both the George Bell Institute (England) and the International Forum on Globalization (USA). Widely traveled, Douglas has presented papers in over 200 international conferences and has visited over 50 countries to speak and present on human rights and the environment. He is the author of several works including the ground breaking WHERE VULTURES FEAST, Shell and human rights in the Niger Delta which he co-authored with his friend Ike Okonta.

Environmentalist and Special Adviser to the President on Research, Documentation and Strategy, Oronto Douglas has been named among the 20 most influential writers, thinkers, and activists in the world. Mr Douglas was listed in a recent book “Political Awakenings: Conversations with History” by Harry Kreiser the Executive Director of the Institute of International Studies, University of California. Mr Douglas was selected with 19 others, from 485 interviews of people which the book described as “distinguished men and women who by the power of their intellect and strength of character shape the world.” Mr Douglas made the Science, Food and The Environment: Movement for Justice category which comprised select individuals that have challenged corporate power which seeks to disproportionately reap the benefits of science and technology to the detriment of the society.

Another reference on ‘doublespeak’ Douglas from the Archives:

ORONTO DOUGLAS ON JONATHAN – Via WIKILEAKS.
4. (C) However, in a conversation with PolCouns the night before, Douglas disparaged Governor Goodluck Jonathan. He said that the OUTSTANDING CORRUPTION CHARGES against him (Jonathan) and his wife (Patience), were troubling.

Douglas then claimed that while Jonathan enjoyed the support of the “Ijaw leaders,” the “restive youth” had little respect for the “so-called leaders.”

Douglas thought that, like the “leaders,” Jonathan was part of the system of corruption that had impoverished the Niger Delta for decades. “Even his development initiative is viewed with skepticism by the populace,” he said.