I have never seen or heard of a president more efficient than Goodluck Jonathan, and his wife in fact, have been this last two months. The Jonathans are working!

I am now convinced beyond doubt that Jonathan never planned to have the elections on February 14th. That was a flying setup from the jump. That date was only selected as a test run. As Jonathan gauged attendance at his campaigns, with barely five hundred people attending some rallies – like the one in Niger state – the president went ahead to activate the postponement plan and then he started working.

Remember the PDP campaign donations of perhaps up to a billion dollars when all is received and totaled, that them Jonathan raised in Abuja last December? Well that money had obviously been barely touched as at February 7th; so when did they plan to spend it in purchasing vote(er)s? That’s evidence right there of the planned postponement.

And now see Jonathan work! Chai! In fact if this was our president for the past five years Nigeria would have been Dubai by now. We would have been a first world country, more super power than the great USA.

Did you see Jonathan in Baga! Wow! When I saw that picture with my two korokoro eyes, I acknowledged that there is God! Goodluck Ebele Jonathan in Baga! Baga where just this January he failed to acknowledge the genocidal massacre of over 2500 defenseless Nigerians? I never thought I will see the day.

But that is just a tip… did you see Madam Ngozi Okonjo-Iweala in Chibok? Yes oh. Team Jonathan is working. Her highness Ngozi who if you remember chided foreign journalists who were asking her about the abducted girls during her holy Abuja global economic forum meeting, yes the same Madam Ngozi went all the way to Chibok to personally lay stone for the foundation of that school Jonathan promised them. 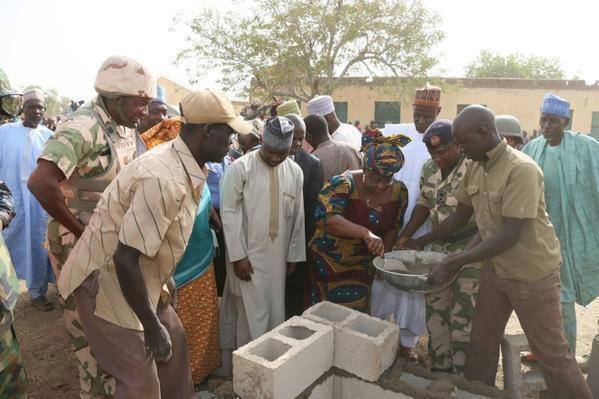 And that is another amazing work of Jonathan. He made the promise at the Paris summit when asked a question on it by an astute journalist, that to address Boko Haram’s abduction of Chibok girls, he “will build a school for them in Chibok” with “very tall walls” so no one can just come and steal their daughters. [Don’t laugh, this is true, view ‘My Visit To Chibok Will Not Bring Back The Girls – Jonathan’ on May 17, 2014 ] Well he is actually fulfilling that promise. It is that Guantanamo school that Madam Ngozi went to lay the cornerstone of. Our president is working!

Have you seen him lately? He and his deputy have not forgotten the people. At last the president is in touch with the people everyday… Well perhaps not the masses but the Cabal. Have you seen the endorsements? The president of Nigeria is investing in them all over the county. He is working hard as hell; no one can deny that, making sure Nigeria’s money is well “invested” in buying endorsements from Cabal, chiefs and thieves alike, most specially the Yoruba chiefs in the Southwest. The “no Chief or Thief left behind program.” I have never imagined a president work this hard. This Saturday he literally performed miracle I am yet to comprehend.

Goodluck Jonathan is leaving no stone behind. He even is showing Nigeria how fit he is to rule us again and spend the next four years in addition to the eight he has lived in Aso rock. I bet you saw him leading the jog to Eagle square and teaching Kanu and Yobe how to exercise. Wow! All this in one month??? But the miracle of Saturday was not just the president becoming Nigeria’s exercise trainer but how he finished that monumental and highly essential task and the same day zoomed to Ile Ife to meet the chiefs there. This presido has become an iwin.

Of course I won’t miss mentioning this one… Yes have you witnessed how in just three weeks Jonathan has almost defeated the Boko Haram insurgency! Okokomaiko! Jonathan is working oh! In just three weeks Boko Haram have been squeezed into one or two local governments. In five years they operated freely and in this postponement three weeks they are already on the edge of defeat… suddenly our army knows how to function and Jonathan knows how to sign MoU’s with Chad to help out clean up the mess. In fact in the six weeks, he wants to do this Boko one so hard that when Chad was doing more than him he told them to step back, that he wants to do this by himself. Jonathan fighting Boko Haram!? This is the ninth Wonder of the World no doubt. This must be headline in Guinness book of world records. Jonathan is working!

But the presidency is not alone oh. Have you seen his wife, Patience lately? From Calabar to Sokoto, Queen mother Dame Faka Patience is not left out. No, not like when she sat in her palace and ordered the prinspal of Chibok over to dispute her claims on the painful abduction, no, this time the first lady is on the ground herself. That Aso rock accommodation must be retained oh. No going back, until the full 16 years have been spent by the Jonathans in the Villa. Diarisgodo! She will not leave the campaign to Jonathan. She does not trust him and his handlers, many of whom have betrayed and swerved him of late. The campaign and money must be disbursed by mama herself. She must make sure the payoffs get to the hands of all the market women to he purchased, one at a time, state by state not minding whatever vocabulary she has at her disposal for the essential mission.

And Diezani? Working too? Yes indeed. Did you see Diezani come out within this glorious 6 weeks and on February 27th say “the NNPC has been demystified”? Yes oh! We have seen it all. The whole oil goddess herself is going as far as telling us mere mortals that she has had to “demystify” her NNPC personal company.

I am loving this six weeks. I never thought I will witness the day. Thank you oh Buhari, if not for any other thing, thank you for this… you have worked miracles already. Mr. Jonathan is working. Ashey the man even without evidence of a PhD which he claimed without a thesis knows how to work. If you have any request or order, please place it shap-shap before the six weeks are over. Jonathan will deliver personally, guaranteed!