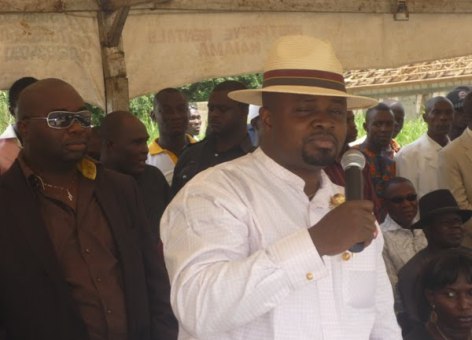 The immediate past Special Assistant on Domestic Matters to former President Goodluck Jonathan, Dr. Waripamowei Dudafa, has stuck a deadly dagger in the spine of his godparents and benefactors, Dr. Goodluck Jonathan and his wife, Dame Patience Jonathan, as he was seen bad-mouthing his former boss and his wife, describing them as “selfish and wicked”.

The former aide, whom a source said was sited speaking to a mutual friend at Heathrow airport over the weekend, said in his bid to put down his former principals, he (Dudafa) did not hesitate to cast morality and decency to the winds to enact lethal deeds of treachery and deceit against the person of the former President and his wife, one couple that has been variously regarded as the architect and progenitor of his political and economic fortune.

To the consternation of this mutual friend, the former aide chose to cast aspersion on his boss and benefactors because, according to him, they failed to live up to their promise of making him governor after all the ‘dirty’ jobs they made him do for them, he said.

The source, said the mutual friend who later reported his encounter with another mutual friend, said the former domestic aide possess no moral or legal rights to perpetrate such treachery against the former first family who, he said was solely responsible for Dudafa’s political rise and relevance even against all odds.

Meanwhile, unconfirmed report says the real reason behind the frosty relations between the former presidential domestic aide and his boss, particularly the former first lady, Dame Patience Jonathan, has to do with the refusal by the former aide to return the sum of fifty million dollars in his possession belonging to the first lady.