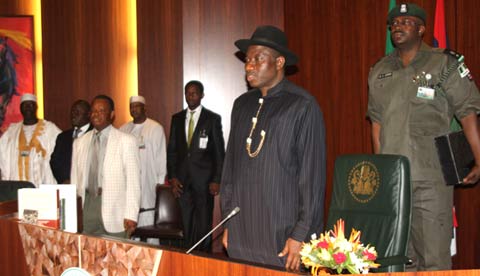 Nigeria’s president, Goodluck Jonathan engaged in a media chat yesterday. It was his 8th since assuming office as elected president of Nigeria. The chat was seen as prompted by the state of disturbance in the nation including allegations of the presidency and military chiefs having effected a coup to maintain his grip on power as an election defeat presented.

President Goodluck Jonathan responding to a string of practiced questions portrayed himself as “clueless” his usual marketing brand, and an “ordinary guy” with no ulterior intentions to enforce his stay beyond the May 29th handover date, however the dishonesty and frank lies in his scripted responses did not take long to make global headlines. 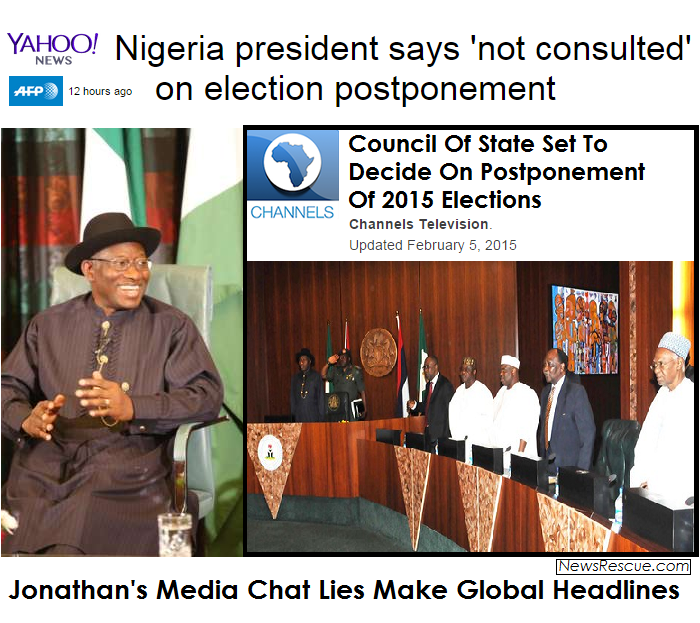 In the media chat the president responded to questions of the election postponement which was orchestrated by his National Security Adviser, Sambo Dasuki and Army chiefs as something of a surprise that he “was not consulted on.”

The response was reaching and could only have been crafted by advisers bereft of intelligence; to suggest that Nigeria’s president was not consulted on the most pressing national issue and an issue that brought global focus, smacked of dangerous and reckless irresponsibility. Morse so, such a response in the face of glaring evidence to the contrary was sure not to scale a days examination.

Barely had the president given his chat, did the lies presented hit global media and blog headlines.

But the world observers quickly recollected that on the 5th of February, two days to the announced postponement the president himself had summoned all past presidents to Council of State meeting intentionally to discuss and press for the postponement of the elections.

Nigeria’s president had not only been consulted prior to the postponement, but actually summoned (and insulted) an inconvenient consultation of all past leaders and current top persons for the very matter.

During the council of state meeting, President Jonathan in his address cited security concerns and lack of preparedness by INEC as his reasons for seeking postponement of the elections.

The council of state had rejected president Jonathan’s proposition and elections were slated to hold on schedule; in February.

It is another day of embarrassment for Nigerians in the global eye.

The “Independent” electoral commission was later forced to postpone the elections by the nation’s security adviser and service chiefs who submitted to the commission that they will “not be able to secure any part of the nation,” in a move that has been described as a military coup.