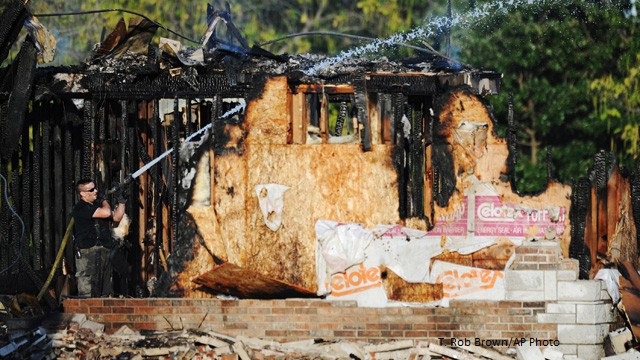 (CNN) – A mosque in Joplin, Missouri, was burned to the ground early Monday, just over a month after an attempted arson at the Islamic center, officials said.

Authorities are investigating the cause of the latest fire. The mosque’s security cameras were destroyed in the blaze, according to Sharon Rhine of the Jasper County Sheriff’s Office.

“This incident should not stop us from worshiping our God,” one member of the Islamic Society of Joplin told CNN affiliate KYTV. “We are going to find a place probably to continue our service to God.”

Kimberly Kester, another member, said the blaze was so intense that the building’s bricks were still sizzling hours after the fire.

Though investigators haven’t determined the cause, Kester suspects it to be another incident of arson.

“I think this act of hate will bring us together,” she told CNN iReport.

On July 4, surveillance video caught a man approaching the mosque and throwing “an ignited object” on the roof, causing minor exterior damage, according to the FBI.

The FBI was offering a combined reward of $15,000 for information leading to the suspect arsonist in that incident.

Kester said the mosque was a target of other acts of vandalism. In September of 2008, a sign at the mosque was set on fire and was also determined to be arson, according to CNN affiliate KODE.

The Council on American-Islamic Relations has called for increased police protection at other places of worship in the wake of the fire and is offering a $10,000 reward for information on the latest incident.

The city of Joplin was the site of a monster tornado that ripped through the area in 2011. At least 161 people were killed and miles of businesses, homes and schools were destroyed. Kester said she is confident the community resolve shown after that devastating storm will again be present as the mosque and its members look to rebuild.

“Joplin survived such a devastating storm and we came together. We can all come together and build a great community once again,” Kester said.

The mosque’s burning comes as an Islamic center in Murfreesboro, Tennessee, prepares to open for the first time after years of legal wrangling, vandalism and anti-Muslim sentiment.

The controversy erupted in 2010, when planning commissioners approved an expansion project at the existing mosque.

The construction site has been vandalized several times, including an arson attack in 2010 and “not welcome” spray-painted on a sign announcing the project. Federal authorities have charged a Texas man with calling in a bomb threat to the center before last year’s anniversary of the September 11 attacks.

The Islamic Center of Murfreesboro is awaiting its certificate of occupancy – the final step needed to open.

CNN’s Darrell Calhoun and Jareen Imam contributed to this report.