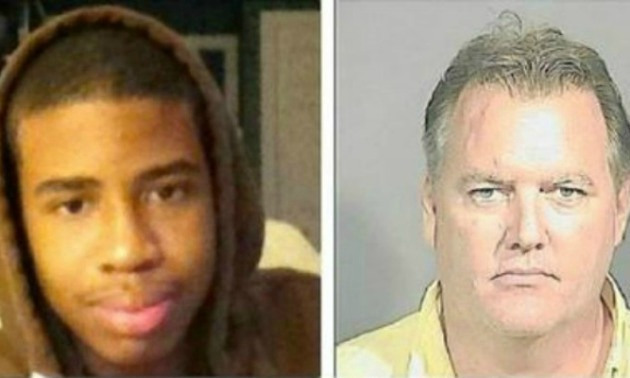 NewsOne- The recent killing of Florida teen Jordan Russell Davis (pictured left) bared striking resemblance to Trayvon Martin. According to reports, 45-year-old Michael Dunn (pictured) pulled up alongside an SUV 17-year-old Davis and his friends were in. Dunn asked them to turn their music down. The two exchanged words and, according to reports, Dunn then opened fire. Davis seated in the back, was shot twice and died in his friend’s arms.

After further details emerged about the shooting, the NewsOne community had a lot to say. Some were angry, others hurt, and a bevvy of other emotions poured out. Here are some reactions:

I hope we can learn something from this. Despite my feelings that the shooter was ultimately wrong, what else happened? Why did the kids engage in an altercation with a stranger? It clearly was not worth the outcome. Adults often do the same. We never know the mentality or state of the stranger you’re arguing with. Are they mentally unstable? Intoxicated? Prejudice against you for whatever reason and more likely to use force?  Why engage with strangers?  Take your pride and principles and move on. The risks are not worth it!  Teach your kids restraint and to not internalize personally what a stranger says.

This is bullsh*t! I encounter some form of loud music blaring from vehicles – on a DAILY basis. Whether I like it, love it or hate it, I keep it moving. Not once have I ever taken it upon myself to ask the driver of a vehicle to turn their music down. After all, who the hell am I? And who the hell was THIS guy?! Seems like he was looking for trouble. Looking for something or someone to take his aggression out on. He couldn’t stand up to his boss, so he decided to shoot into a vehicle of unarmed teenagers who, by the way, were doing what teenagers do – playing their music loudly! How can this possibly be construed as him “standing his ground”?! HE was the aggressor!

So let me understand “stand your ground” because I’m not from Florida. If I walk up to a person walking, talking on the phone, and ask them a question, and they refuse and begin to act in a defensive way because they have no idea who I am or what weapon I may have, I can shoot them because I must stand my ground?  If I pull up to a vehicle (parked) and initiate a conflict with them, I, not being known to them anymore than they to me, I can shoot them because I’m standing my ground? Let’s turn the tables ignorant folks. Had young Mr. Martin shot this unknown man who approached him in that gated community would he be able to use the “stand your ground” defense? Or if 1 of the 4 teens in the SUV opened fire shooting into the car occupied by this man and his girlfriend, drove off and waited until the next day to turn themselves in, would they have been standing their ground? The only common factors in both cases are the shooters were white, the victims were black, the shooters were attempting to assert some sort of control over strangers, and the victims were unarmed teens. Had the races been reversed, a fool could see the plea of standing your ground would not be an option. Look at the cases in the news in Florida that weren’t accepted for “stand your ground.” Each case that I’ve seen the shooters were black male, female, black on black, or black on white. It didn’t matter. I’m no racist and I’m not blind. How can anyone defend these two men’s actions?!

This happened near by, and I am pissed he is using stand your ground! That is not what this law is about! It’s to protect you if someone is actually doing you harm or obviously has intentions to harm you like pointing a gun at you or loved ones. They are abusing this law for selfish reasons! Why did he drive up next to the teens? Why not roll up your window and drive away? Stupid idiot should get prosecuted to the fullest.

If you want to voice your opinion on the Jordan Russell Davis killing or any other popular item in national news or in your local town,  e-mail your thoughts to [email protected] Add your name, where you’re from and your Twitter handle.  All posts should be between 100-200 words. Don’t forget to add the words GUESTBLOGGER in the subject line so we know it’s you. Can’t wait to hear from you!  Link