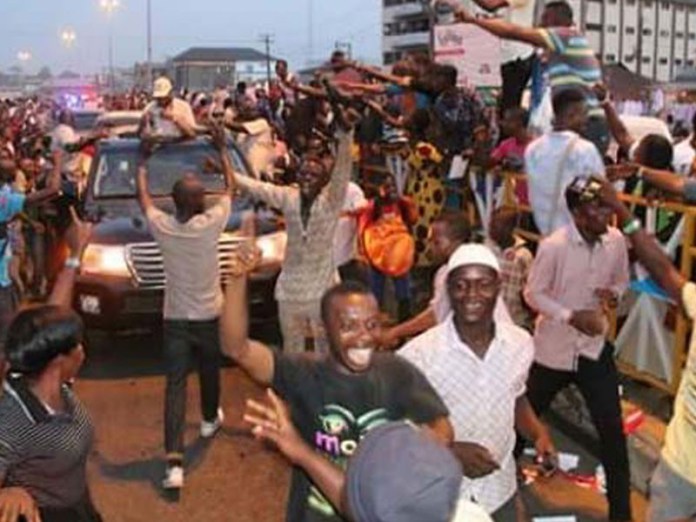 It was jubilation galore in Akure, Ondo State as the Court of Appeal okayed Eyitayo Jegede, SAN, to contest Saturday’s poll as the candidate of the Peoples Democratic Party (PDP).

The people, who had gathered since morning at the Eyitayo Jegede campaign office at Ijapo to await the decision of Justice Ibrahim Salauwa, spontaneously burst into jubilation immediately they heard that the court had ruled in Jegede’s favour.

The crowd moved in a motorcade from the office of the PDP to the main Oyemekun/ Adesida Road.

They also moved to Arakale Road singing and dancing to music with the popular jingle of Jegede.

The activities of the jubilant crowd caused a traffic snarl on the two major roads in the state capital.

The convoy of the wife of the governor of the state, Mrs Olukemi Mimiko, who ran into the jubilant crowd at the popular Oja Oba market, failed to hold her emotions as she and her entourage joined in celebrating the restored mandate of Jegede.

Mrs Mimiko openly identified with the people, carrying placards of Jegede and urging the people to remain resolute and focused towards winning the next Saturday election.

Some market women hurriedly closed their shops and joined the procession while some state workers abandoned their offices to join in the celebration.

The Jimoh Ibrahim Campaign Office in Oyemekun, was under lock and key while the flag of PDP in front of the office has been removed and security operatives at the office had vacated the place, turning it to a ghost house, while the office of Biyi Poroye, PDP factional chairman in the state was also deserted.

Social activities in the state however picked up as most drinking joints in Akure came to life, as people left their various offices and retired to drinking joints declaring surplus.

In his reaction to the verdict and message to the people of the state, Jegede appreciated them for their support and prayers during his travails.

Jegede said: “There is no doubt that the past few weeks have been very challenging and trying times for us as we contended with anti- democratic and evil forces who tried to subvert the will of God and the mandate of the people freely given to us.

“It was a tortuous journey that tested our faith in God and our conviction in the refreshingly different days ahead of us as we were taunted and harassed by hired propagandists while we tenaciously forged ahead. We submitted our grievances to the court despite the manipulation of those who are opposed to democracy

“We insisted we would explore all legal means in our avowed belief in the rule of law and judiciary. Today our mouth is filled with laughter and heart with praise; our resilience paid off and our conviction to this doggedness of purpose has made our case another judicial precedence in the country.