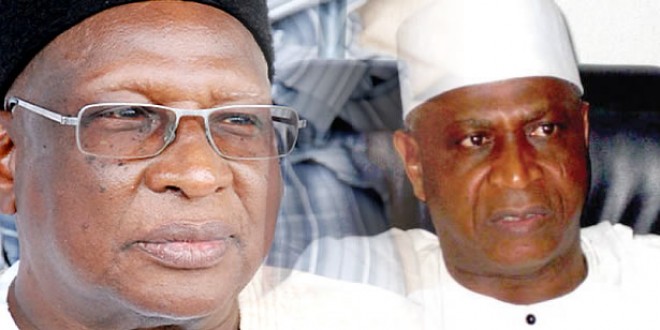 NewsRescue- Despite the entire nation and world knowing that the PDP political party dramatically divided into PDP and newPDP, a justice without an iota of shame and bribed with the missing 20 billion dollars, told Nigerians that there was no division of the party prior to the decampment of 37 representatives.

A Federal High Court in Abuja on Monday gave an order of perpetual injunction restraining the lawmakers who defected from the Peoples Democratic Party, PDP, to the All Progressives Congress, APC, from effecting any leadership change in the House of Representatives.

Delivering judgment, Justice Adeniyi Ademola lambasted the decampee lawmakers. He said they no longer had any business, morally and legally, to stay in the House of Representatives.

He said they should honourably resign from their seats as members, having moved to another political party while their tenure had yet to expire.

“Having perused the arguments of counsel and the constitutional provisions, it is clear and unambiguous that the defendants were sponsored by the PDP and won the election on its platform. It is also the court’s opinion that their tenure has not expired and there is no division in the PDP.

“The defendants are, therefore, not competent to vote or contribute to any proceedings in the House of Representatives. An order of perpetual injunction is, hereby, ordered, restraining them from altering or attempting to change the leadership of the House of Reps,” Mr. Ademola said.

The PDP had on January 7 instituted a suit seeking to restrain the House of Representatives from altering the composition of its leadership.

The party had commenced the action following the defection of 37 lawmakers, who won election on its platform, to the opposition APC. The defection had initially given the APC a slim majority in the House. The majority was later reversed when some APC lawmakers decamped to the PDP.

The PDP’s counsel, Yunus Usman, had, while arguing his originating summons, faulted the cross-carpeting of the lawmakers, saying that the legislators did so during the dependency of a judgment.

He argued that by virtue of the October 2013 judgment of Justice Evoh Chukwu, which he claimed said there was no division in PDP, the matter had been laid to rest.

Mr. Usman had further submitted that by virtue of the provision of Section 68(1)(g) of the 1999 Nigerian constitution, as amended, the  lawmakers ought to have vacated their seats immediately.

The counsel to the defendants, Mamoud Magaji, had in his submission, argued that it was wrong for the PDP to have sought to restrain its former members from House activities for defecting.