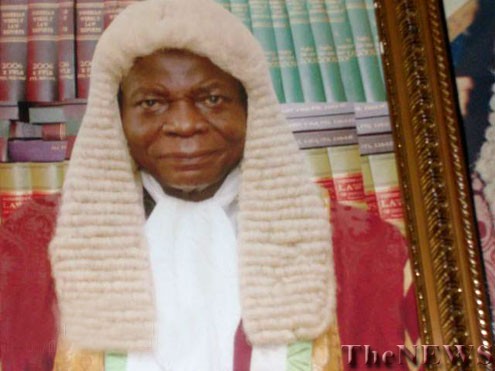 The Society for the Rule of Law in Nigeria,(SRLN) has reacted to the news report of the Retirement of   the suspended  President of the Court of Appeal  Justice Ayo Isa Salami saying it marks the end of  a beleaguered era of a tainted judge whose allegations of conviviality with the ACN leadership will continue to haunt him even in retirement.

The group in a statement signed  by its National Coordinator,Comrade Chima Ubeku stated : “His retirement coming on the heels of the latest report  of the Police which confirmed the telephone interactions with opposition leaders during the pendency of Governorship Election Appeals in Osun and Ekiti state before him,continues to act  as a stain in the white garment of the judiciary whether Justice Salami retires now or not.The greater tragedy is that The National Judicial Council (NJC) and President Goodluck Jonathan has not found the courage in the face of damning evidence to dismiss the judge even when in a partial application of  disciplinary procedures lower ranking justices like Justice Abang, and Naron were dismissed from the judiciary for lesser offences”

The group said the retirement would however allow the Court of Appeal which has lost its pride of place in the face of the scandal, to rediscover itself and sanitize it’s fold, calling on the CJN justice  Mariam Mouktar to give bite to her anti corruption posture by ensuring that  the code of ethics of judges should be implemented to the letter.

“the NJC should revisit its decision of the Justice Abdullahi panel set up to probe allegations of misconduct against Salami and justices Clara Ogunbiyi,Ariwoola etc who sat on the panel of Osun and Ekiti states,who were exonerated based on the ignoble role of the MTN in suppressing the critical information required from the call logs provided to the panel by former Governors of Osun and Ekiti states. Stating, that since “Police investigation has now confirmed that Justice Salami compromised his position as the President of the Court of Appeal, it was now time for the National Judicial Council NJC to dismiss him from the bench failing which we call on President Jonathan to reactivate his letter to the Senate for the dismissal of Justice Isa Salami from the bench for breach of his oath of office and code of ethics of the judiciary. Much more damning is the allegation of perjury hanging on the neck of Salami which is a criminal offence for which he should be prosecuted.This is without prejudice to his retirement or not ” the group said.

The society urged the police to conduct further investigation on whether financial inducement was involved and the magnitude of the amount involved in the saga in view of the well known capacity of Asiwaju BolaTinubu to financially compromise any institution or person in the country.

The  society calls on the Attorney General of the Federation to immediately order the prosecution of MTN for its ignoble and unethical corporate conduct in frustrating security agents in unraveling a grievous act of corruption wondering whether the Company could perpetrate such act in South Africa,it’s base.

According to them, although MTN,through its pilfering and plundering of its customers, had enormous financial  resources to corruptly induce and compromise any institution in the country, it called on President Jonathan to order the Attorney General prosecute the company in line with the transformation agenda of eradicating corruption in Nigeria,adding that this was the minimum litmus test of the commitment of the Present administration to it’s anti corruption mantra.

It would be recalled that the report of Police investigations into MTN’s alleged manipulation of the call data records in question Reference: CR3000/X/X-SQD/FHQ/ABJ/VOL.2/

230, dated February 8, 2013, titled Police Investigation Report on A Case of Conspiracy, Forgery and Perversion of the Course of Justice By MTN Nigeria Ltd,  reads in part: “Request was made to MTN to furnish the particulars of the following subscriber numbers and the company responded thus: 08034004887 belongs to Justice Isa Ayo Salami; 08034240000 belongs to Bola Ahmed Tinubu (registered incidentally in the name of MTN Director, Tunde Folawiyo (Lagos State Governor); 08034010700 belongs to Alhaji Tunji Ijaiya.

“Subscriber no. 08034010700 which belongs to Alhaji Tunji Ijaiya of 8, Aderemi Adeleye Road, GRA, Ilorin appears to have been used as a link between 08034301111 (Lai Mohammed), 08034240000 and 08062240104 (Bola Ahmed Tinubu), and 08034004887 (Justice Isa Ayo Salami of Plot 11, New Bussa Close, Area 3, Garki, Abuja) as there was exchange of calls between Justice Ayo Salami and Alhaji Tunji Ijaiya on the one hand and Tunji Ijaiya with the other mentioned subscribers on the other………While call logs earlier released to Area G Command, Ogba, Lagos spanned a period of five calendar months, MTN claimed its historical data storage capacity was limited only to 3 months”

According to the Report, “ A legal advice received from the Legal Section of the ‘D’ Department (FCID), Abuja dated 8th February, 2013, opined that MTN Nigeria should be prosecuted for suppressing evidence in this case as provided by Section 167 (8) of the Evidence Act, please”.