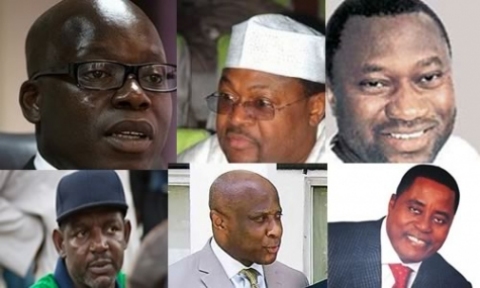 When President Muhammadu Buhari appointed Dr. Ibe Kachikwu immediately after assumption of office on May 29, 2015 as the Group Managing Director/ Chief Executive Officer (GMD/CEO) of the Nigeria National Petroleum Corporation (NNPC), it bemused many Nigerians.  Those more dazed and disarmed by the decision were members of the cabal which has dubiously gripped the oil sector and troubled it for decades by ensuring that nothing works in the best interest of the generality of Nigerians.

The cabal which has survived many governments in the country
erroneously believed President Buhari would also genuflect to their antics by appointing an NNPC overall boss based on their counsel, who would be amenable to their dictates. They were even more surprised when Buhari expressed his desire to also head the Petroleum ministry and to elevate Kachikwu to double as his deputy and NNPC boss.  Their aspirations crashed before daybreak, as Nigerians applauded the choice of Mr. President in Kachikwu.

But to fight back, the cabal which comprises top politicians and
businessmen with vested, but criminal interests in the running and
control of the oil sector has never seized unleashing attacks on
Kachikwu, the Minister of State for Petroleum. The attacks manifest
through surrogates or faceless groups who take solace in rushing to
the public to fault or allege multifarious wrongdoings in the current
management of the oil industry.

Even Dr. Ibe Kachikwu weighty credentials in academics and the oil
industry which advertised his competence made little sense to his
adversaries. But from his elementary school to the University of
Nigeria, Nsukka where he studied law to the Nigerian Law School and
subsequently,  his LLM programme at Harvard University, Kachikwu
carved a niche with distinctive first class performance, just like in
his Doctoral  degree programme.

His records of hard work and unblemished service in several oil companies abroad and in Nigeria were testimonies of his competence on the job. Kachikwu’s experience  in the oil industry in policy- making positions  included  General Counsel/Legal Adviser, Texaco Nigeria and Texaco Overseas Petroleum Co (1984 -1994); General Counsel/Secretary, Mobil Producing Nigeria Unlimited (2001); Executive Director, ExxonMobil Group of Companies (2003). The Minister of state has also served as the Executive Vice Chairman/General Counsel, ExxonMobil Companies in Nigeria and Oversight Counsel, ExxonMobil Companies in Africa since 2009.

Yet, some corporate oil thieves in Nigeria stepped up pranks to dismantle and deliberately frustrate his vision and mission in re-engineering of Nigeria’s comatose oil sector. It gladdened the hardened hearts of these unscrupulous elements more not to remember that before Buhari and Kachikwu’s emergence on the managerial ladder of the oil industry, Nigeria’s economy suffered stagnation.

The anomalies in the oil sector, where Nigeria derives its main
strength and sustains its foreign reserves defiled virtually all
remedial actions. No one is in doubt that revenues from the sale of
crude oil in billions of dollars could untraceably develop wings or
get missing; national revenue nosedived incredibly, and acute scarcity
of all petroleum products was the nightmare of Nigerians and could
rage for months intermittently and government of the day feigned
helplessness.

Furthermore, the cabal also frustrated the passage of the Petroleum
Industry Bill (PIB) designed to impose sanity in the operations of the
oil sector and also abused the oil subsidy regime through outright
embezzlement of funds. Pipeline vandalism and theft of crude oil on
high seas were not only celebrated acts, but reached alarming rates
and the culprits crawled to their safe havens freely.  While Nigerians
wailed under this yoke, oil crooks who masterminded the blight in the
sector smiled to the banks.
But the scenario has changed with Buhari and Kachikwu as the helmsmen.
The Minister of State whose credentials attest to excellence in his
over 30 years’experience in the administration of the oil industry has
so far not only demonstrated determination to rescue the NNPC and
Nigeria’s oil sector, but he has proven within seven months that
resources from oil, which is the nation’s cash cow can be now
harnessed and deployed for the benefit of Nigerians.

It is on this premise that many have perceived the threatening
invitation of the Petroleum Minister, President Buhari and by
extension, his Minister of State, Kachikwu to appear before the House
of Representatives Ad hoc committee to explain sour SWAP deals more of
veiled attempts at blackmail than scouting for sanity in the oil
industry.

The fuss is about the controversial Refined Product Exchange Agreement
(SWAP) contracts consented by NNPC and the Pipelines Product Marketing
Company (PPMC), between 2011 and 2015. Under the deals, 445,000
barrels of crude were allocated to trading companies in exchange for
refined petroleum.
Rep Zakari Mohammed’s committee is rightly livid with anger that crude
oil worth over $24billion was involved in the deals, but two marketing
companies Duke Oil and Tranfigura still had questions to answer.

It followed PPMC’s disclosure that  Ontario still had $98m  balance
of refined products to deliver, while  Aiteo which was sub-contracted
the  another deal by  Duke Oil is still keeping Nigeria’s $37m worth
of refined oil.

The twist in the tale is that the Chief executives of the two oil
companies have declined personal appearance before the committee,
preferring to send legal representatives. But why  Zakari is more
interested in causing the appearance of President Buhari before a
House ad hoc committee in whatever guise to explain  petroleum
ministry’s role  in the deals and damned any caution that  Buhari or
Kachikwu  were not privy to the signed  contracts  casts doubts on the
motives of the investigation.
Exposing his mindset, he declared that “Let the minister come and tell
the committee that he knows nothing about the transactions because he
was not the minister at that time.“They should lead us to the minister
(ex-ministers) who have the right information.”

Zakari’s tantrums on Buhari or Kachikwu can hardly find justification
in the light of the facts of the case.  If not acting a script or
political arm-twisting, the former Ministers of Petroleum who
masterminded and signed the deals are still alive and not out of reach
of the committee to invite for explanation.

To understand why the House is more interested in screaming at Buhari
or Kachikwu over such a simple matter is confounding.   Could this be
a ploy to cast fears into Kachikwu and scar him from continuing with
the arduous task of reforming the rotten oil sector in Nigeria?
Nigerians believe he will not succeed, no matter how loud he bullies
Kachikwu, as they are solidly behind him. Let the House adhoc
committee summon the appropriate persons and stop playing to the
gallery.

Ekele is a forensic analyst on Oil and Gas based in Port Harcourt.