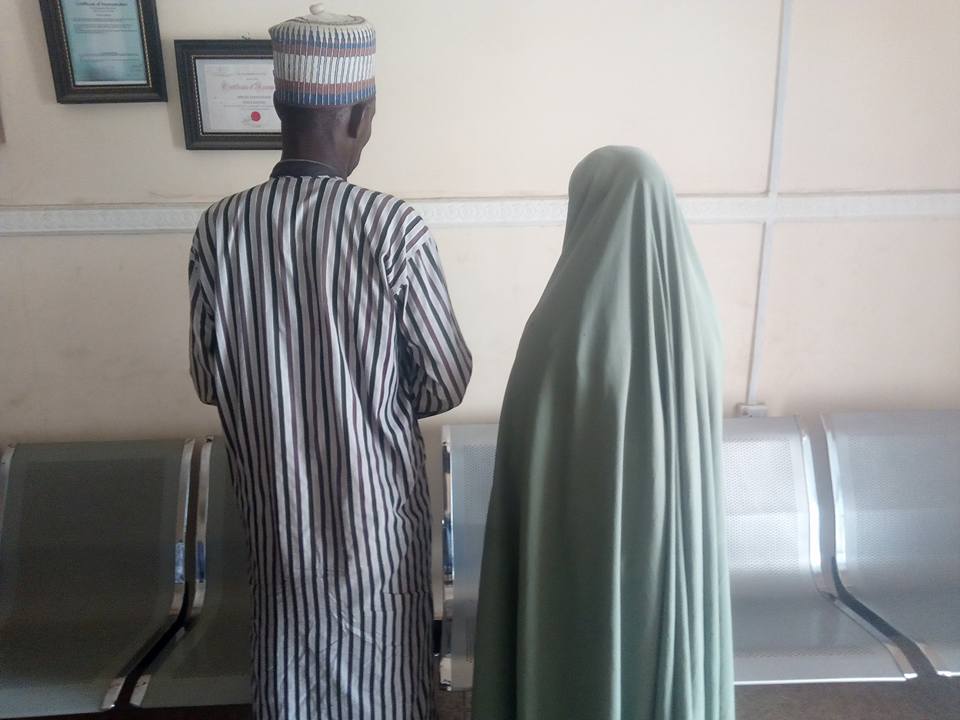 Maryam Mu’azu is the name of the girl, she is currently in primary 6 at L.E.A Anchau Taka-Lafiya in Kubau local Government of Kaduna state, north –western Nigeria.

She is actually carrying Five months pregnant as a result of raped by Eight men including her Neighbor, an elderly Imam of a mosque, that were reported allegedly molested her severely ,and have a force sex with her on different spot.

Maryam said “they usually call me and give #500 naira went am back from school, when I went out hawking selling things ,they usually force me into it, and they have been warning me not to tell my parents, they promise to killed me if I dare tell my parents.”

“They threaten killing me each time they rape me,that is why I refused telling my parents,I was so afraid that is why I kept quiet over the issue.”

Mallam Mu’azu Shittu,age 50 years , is the father of the young Girl who toke the case to Upper sharia court ikara local government Kaduna state in the search of justice for his daughter that was raped while hawking.

Mu’au said, 8 men raped my daughter, and now she is pregnant, they usually gave her money while some give her gift to have sex with such a young girl when she goes out hawking.

He said,they usually gave her Five hundred naira ,and sex her the way they want it,they merely turned her to be like sex machine.

Adding that for the past 5 months ,they couldn’t sleep with their double eyes close because of this problems because she is too small to be carrying Twins, and there is no single one among the rapists that is ready to take the responsibility as father of the unborn babies.

Mu’azu also pointed that among the 8 men that were allegedly indicated as the rapists, there is one of his close neighbor “Alhaji Danlami sakatare” he is our imam, and because of what he did to my daughter, I stop going to join them in prayer in the mosque,because I cannot follow the prayer of a rapists who want to destroyed my family.

“I don’t like bastard child in my family,that is why am doing my best to protect the integrity of my family.”

The 8 men that were allegedly suspected to have raped the girl were given on bail terms on Friday,meanwhile the father has proceed further to report the case to Human right organization in search of justice for his Daughter.

Hajiya Rabi salisu Ibrahim is the founder of a renowned Human right organization in kaduna”Arridah Relief foundation of Nigeria”in which the case was brough to them to assist the parents in the search of justice for the little girl that is facing many problems as a result of the situation she is.

Rabi said,”we received the case Today in our office,and for the past two years,we have treated over 400 cases of raped and child abuses,but we have never come across this type of inhumanity.”

Rabi said, it was devastating to see 8 men raping 13 years old, she was pregnant,she has no breast at all and her parents are threatening to abort the twins,in other to avert public embracement.

Rabi added that,for the fact that the rapists are 8 in number,and she is pregnant with twins kids,she might be probably having HIV/AID or sexually transmitted diseases STD or some kind of dangerous infection as a result of force sex.

She then said,we need justice for this girl and that is why we need the support of kaduna state government ,all human right organization and Religious leaders to quickly intervene into the matter ,in other to save the poor child that facing daily challenges.

Meanwhile ,another women organization “Foundation for the protection of women and children in Nigeria” has called on Jama’atul nasurl islam JNI and kaduna state Government to suspend the Imam from leading prayers and give him a tougher punishment, so as to serves as a lesson to other Clerics across the country.

In conclusion, report reaching me now, the case will be transfers to Division police Kubau local government from Ikara local government, for proper investigation and further the case to kaduna to continued court proceeding.