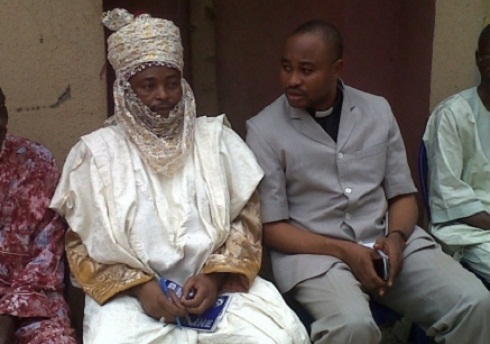 It was a good omen yesterday in the troubled city of Kaduna State as Muslims and Christians embraced one another and reflected on the sour relationship and the need to forge ahead.

The occasion was a visit by the Christians who donated grains and other foodstuff to the Muslims for six mosques in Tudun Nufawa, near Kaduna Polytechnic. Continued below…

Both sides accused politicians and selfish Nigerians of creating disharmony between them, and of being responsible for the spilling of blood being experienced in Northern Nigeria and other parts of the country.
According to Daniel Ibrahim, a member of ECWA Church on Lemu Road who was in the Christian delegation to their host community, Reverend Yunusa Sabo Nmadu Jnr. led the visiting delegation, which also included some elders such as Engr. James Bawa Kufana.

Ibrahim who sent pictures and a brief account of the event to SaharaReporters, “We were received by Malam Shuaibu Balarabe, the Sarkin Dutse of Tudun Nufawa. We were many from our Church. Rev Nmadu explained the importance of peace and that it is God in his magnanimity that created the world as it is today. And [that] nobody can change it except if mortals are [accusing] Him of imperfection. He told them that the foodstuff are nothing but a symbol of love and peace from Christians.”

The Sarkin Dutse, Malam Shuaibu Balarabe, welcomed the Christians and reiterated that Islam is a religion of peace contrary to the hate campaign, he said is being propagated without reason.

“We are not what is being said, and you know it,” he assured the Christians.  “Have we not lived together peacefully in the past? Why now? Were we not practicing our religions in the said glorious past?”

He further assured the Christians of their safety and described the day as one of the happiest in his life.
The donation from the Christians included bags of sugar, maize, millets and other grains.

It would be recalled that last month, over 50 young Christians visited the Sultan Bello Mosque in the city and broke the Ramadan fast with Muslim youths as part of ongoing efforts to strengthen unity, peace and coexistence between both faiths in the troubled State.

There was also a cooperation accord between both faiths in the city during last year’s election.