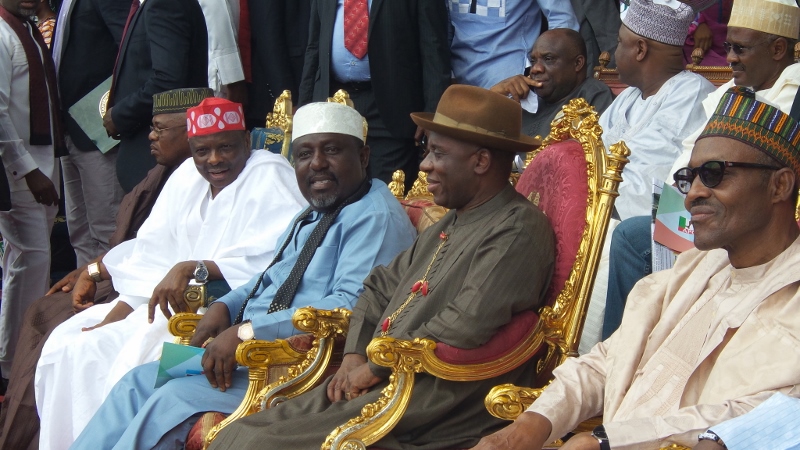 Member Contact and Mobilization Committee of the All Progressives Youth Forum

With due respect and honour I am writing this letter to you as a result of the internal crises our great party is facing in Kano,  Sir, when I read on the national dailies yesterday that the governor of Kano state Dr Abdullahi Umar Ganduje would reconcile with his former principal I was delighted not because of any fear but what the crises might lead to, internal party crises does not yield positive rather negative.

The root of this crises in APC Kano was as a result of a condolence visit the senator of Kano central Rabiu Musa Kwankwaso paid to the governor last two weeks over the death of his mother, the former governor was welcomed amid cheers and jubilations by the people of Kano. It was his first visit since after he left office as governor of Kano state, the mammoth crowd that welcomed him accompanied him to the village of Ganduje is a testimony of how he is loved by his people. Such a visit was perceived by his opponents and some sycophants from the governors side as a political rally, the former governor instead to mourn over the death was busy holding a rally.

This is unfortunate the way they perceived such a visit, they do that to cause trouble as the former governor has no that in his mind, in short he was given a surprise welcome by the people of Kano, it is out of love and his tremendous achievements as governor they chose to pay him back with this, nothing like a rally but a lesson that the senator is in control of the politics of Kano nothing more no less. Sir, you can testify to this during the presidential rally of President Muhammadu Buhari in Kano, you have seen how millions of people were chanting kwankwaso and at the same time wearing the symbol of kwankwasiyya, I mean the red cap. Nothing has change, Senator Kwankwaso is still loved by his people more especially the common man, people at the grassroot, so any attempt by the party to maltreat him will not yield good considering how strong he is, rather will help in strengthening the opposition.

Sir, today our party make a descison of removing the state chairman Alhaji Umar Haruna Doguwa by replacing him with the special adviser to governor Ganduje on political matters Abdullahi Abbas(Dan Galadima), this descison has further worsened the situation, yesterday at the state house the governor while speaking to journalists said all efforts to reconcile with his former principal will be made, he described the crises as a personal one and family affair but it is unfortunate to see what happened today at party secretariat under the watch of the governor. This is clearly showing that Ganduje is not straight forward and is speaking from both sides of his mouth not what is in his mind, as an elder and somebody of his age I don’t expect such from him and this has further proven that reconciliation is not possible without the intervention of the National working committee.

I will use this medium to call your attention as National Chairman of our party to intervene for the interest and integrity of other party members, if this will continue it will lead to the total Collapse of the party in Kano and will pave way for the PDP in 2019 which we don’t hope, Justice must be done to the camp of The Super senator as the governor is using all powers to maltreat us(the kwankwasonians), arrests have started and we don’t know where this will end to, as I am writing this, a close confidant and former chief of staff to Senator Kwankwaso Dr Yunusa Adamu Dangwani has been arrested by the state security service in connection of organising a solidarity rally to the red cap and Senator Kwankwaso. What is wrong in this, isn’t our constitutional right? Why is the governor afraid? Is it because of the massive followers of kwankwasiyya in Kano that he chose to be treating us this way? Chai! We have a long way to go!

The party at National level should know that The Super senator Kwankwaso is not such a person that will be dealt this way by someone he anointed as his successor, harassments, intimidation and series of threats to the kwankwasonians by the present administration and which by virtues of their contributions you were brought to power is unfortunate.

The party under your leadership Sir, should do everything possible in bringing measures that will settle this crises if not the end of APC in Kano have come to an end, in the history of internal party crises I learnt that it has never yield to positive rather negative.

Internal crises of a ruling party leads to its Collapse and a times to political thuggery among the different factions of the party, that may cause death, injuries and whole lot more.

May God Protect us!

Thank you Sir and God Bless,

Member Contact and Mobilization Committee of the All Progressives Youth Forum