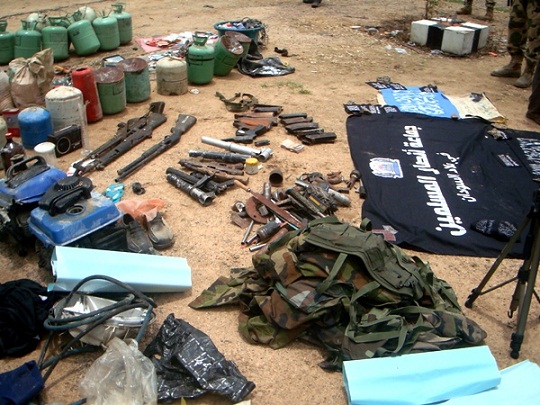 The Joint Task Force (JTF) in Kano said it has scuttled plans by “terrorist elements” to carry out fresh attacks in the state at the forthcoming Sallah celebration, during a “preemptive” operation Saturday morning.

Muslim faithfuls are preparing for the Ed el-fitr festival billed for next week to mark the end of this year’s Ramadan fast.

Addressing newsmen today at the headquarters of the 3 Brigade Nigerian Army in Kano, the JTF through the state Director of State Security Service, Mr. Bassey Eteng, disclosed that it had recovered large quantities of arms and ammunition, as well as explosive devices that were to be used in the said attack.

JTF also said it arrested three persons in connection with the foiled attack.

According to the task force, the weapons were uncovered during a raid around 6am on a suspected hideout of the “terrorist elements” inside a bush in Tudun Bayero in Gadan Tamburawa suburb of Kano. The hideout, which is located about 10 kilometres from Kano city off Zaria road, was initially used as a poultry house, said JTF.

Eteng said the raid was based on security information.

“From intelligence available, the materials and ordnance were to be used on innocent persons during the forthcoming Sallah celebration,” he said, and added that the place was also being used for production of propaganda materials by the group.

“He was released the very day he was arrested after he was interrogated,” he said.

It would be recalled that the owner of the popular restaurant which has outfits across the country, was picked on Thursday evening by men of the JTF at his residence in ‘Yan Majalisa Estate in Gwammaja quarters.