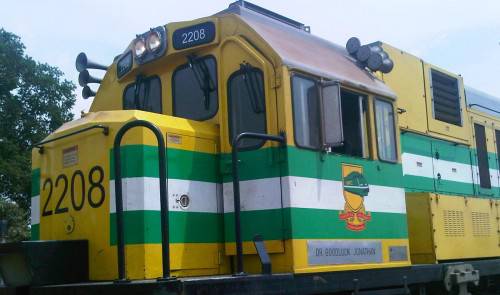 Passengers traveling on a train from Kano State to Port Harcourt on Thursday evening narrowly escaped death as a Dangote truck loaded with bags of cement passed an illegal crossing point, causing the rail line to shift from its normal position as the train approached.

The incident occurred in Mungedi, a highly populated suburb in the Madobi Local Government Area of Kano State at 4:16 pm, sixteen minutes after departing from the Kano State terminal.

Villagers who witnessed the incident made a concerted effort to flag down the train as it approached the section of the rail line that had been damaged by the truck.

The engineer, identified as Garba Garba, noticed the villagers waving their hands and managed to bring the speeding train to a halt, successfully avoiding derailment. He confessed that, “it would have been very dangerous for the passengers, the crew, the coaches and the surrounding houses if the train had derailed because of the shift.”

“The shift on the rail line occurred because the truck and the load were too big for the small route passing over the rail line,” according to eyewitness Sulieman Abubakar, adding “that the truck also kept on thrusting back and forth on the tracks while the driver was trying to take a turn.”

A team of policemen were promptly mobilized by the railway authorities to the site of the incident to look for the Dangote truck driver, who had fled the scene to evade possible arrest.

After one hour of work, the team of engineers from the Nigerian Railway Corporation were able to temporarily fix the rail line, allowing for the Port Harcourt bound train to continue its journey.