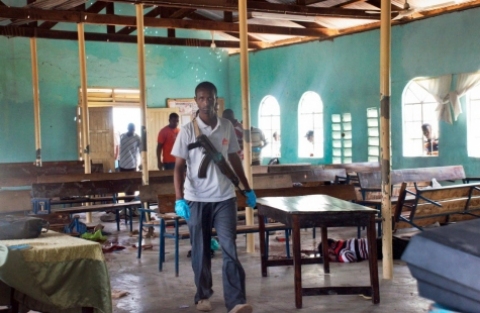 Only few days before the opening of GV2012 in Nairobi, Kenya experienced bloody blasts and kidnapping in Mombasa and in the town of Garissa. A blast hit a nightclub on 24 June killing 3 people, just a day after the US embassy warned Kenyan authorities of an imminent attack in the city. The crowd had gathered at the club to watch the Euro 2012 quarter-final between England and Italy.

“I had just arrived and was having a drink as I waited for the football match to begin, then I heard an explosion, and another and another. I went down on my belly. Then I saw a car speed off and bodies lying all over,” said Muthoni.

On 1 July, in the Kenyan town of Garissa masked attackers killed 17 people and wounded 45 in a gun and grenades attacks on two churches. This town is being used by Kenyan army as a base for operations against al-Qaida-linked insurgents in Somalia.

In a post reproduced on Sahara Reporters, James Macharia noted

Although a majority of Kenyans are Christian, Garissa is more heavily Muslim. The town of around 150,000, a market centre for the trade in camels, donkeys, goats and cattle, is largely populated by ethnic Somalis. The simultaneous attacks on Our Lady of Consolation Cathedral and the Protestant Africa Inland Church in the northern town of Garissa were the most recent in a series of incidents since Kenyan troops were sent into Somalia in October to crush al-Shabaab militants.

In another bloody attack at the Dabaab Refugee Camp, four foreign aid workers from Canada, Norway, the Philippines and Pakistan were seized and their Kenyan driver killed by suspected Al-Shabaab militants. Combined actions by Somali national army and Kenyan military them rescued after 3 days of captivity.

Protests and online reactions have been furious, condemning the attacks, calling for national unity online and organizing actions to counter future attacks. An article on the website nation.co.ke of the main Kenya newspaper generated many comments from netizens:

This is a dark day for Kenya. These cowards want to create civil war; they have already destroyed their own country by this means. Let’s not allow them to insight hate between us. Muslims and Christians have been living side by side for centuries with harmony and we will live like this forever. Their coward act will not have effect to our nation.

…. However, its the high time Kenya evaluated her hospitality principles. The KDF have helped to restore peace in many areas inside Somalia. The refugee camps in Kenya Somalia border should now be closed and those people helped to go back to their country. Most probably, these attackers are performing their cowardly acts from those camps and then crawl back there afterwards. Even if our security forces try their best to get these criminals, its hard to fight an enemy within.

Dear Nation,it’s time we all start calling this attacks for what they are……Terrorist attacks. By calling them church attacks,it could mean just about anything while we all know that some radical elements linked to Alshabab is behind this. kenyans are paying a high price over years of ignorance…we all knew that there were radical elements in our country and we chose to stay silent…..but we can no longer continue with this ostrich strategy. The first step is for us to call this attacks for what they are Terrorist attacks

10.20 Am? that was broad daylight. Something is not adding up here, where was the security personnel, the Army, the Police, the Ap’s? How can two or three gunmen do such act with impunity at 10.Am when Garissa has thousands of security personell? It was much easier to cordon the area and flash out those culprits. Once again the security personnel failed the innocent Kenyans who pay them their hard earned taxes. its really shame!

NSIS must tell Kenyans who is throwing grenades into churches and crusades, if it is a shadowy element of Kenya’s politics we want to know – if it is Al shabab then Military Intelligence have to wake up, deploy undercover Agents in the same dark corners from Kismayu to Eastleigh and terminate with extreme prejudice…let us stop playing nice. This was never going to be a regular military campaign

Further more, it is even our duty as Muslims to guard and protect all innocent life, including those in Churches. We implore on brothers to spread our messages and encourage a resistance among us Muslims who will apprehend those who claim to be Muslims but are simply workers of the devil, and perpetrate these atrocities.

The information was reproduced by the bog My Joy Online, receiving a comment from John Mensah, who said :

Talk about peaceful co-existence. This should be a model for all. Even the intent is praise worthy.

However, the perpetrators of these acts of terror seem not to be paying much attention to these reactions:

Kenyan police has on Thursday reportedly arrested a man with two grenades as he tried to sneak into an Agricultural Show Ground in Nakuru, just moments before Kenyan President Mwai Kibaki arrived at the scene.

In the meantime, investigations are continuing and eighty-three people have been arrested in a massive security swoop launched after Sunday’s twin attacks in Garissa churches.