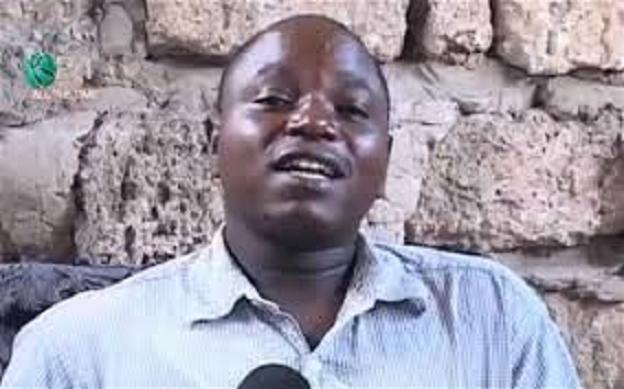 Two men in Kenya have agreed to marry the same woman, taking turns to stay with her and helping raise her children.

Joyce Wambui had been torn between two lovers for more than four years and was unable to choose between them. So she joined in a contract stipulating that Sylvester Mwendwa and Elijah Kimani would “share” her.

But Mwendwa’s decision to go public about the unusual deal has infuriated Wambui, cost him his job and forced him into hiding to escape a public backlash in Kisauni, Mombasa.

The 26-year-old told the BBC that he entered a pact with Kimani to end their rivalry. “It could have been very dangerous if the other man would have come to her house and caught me,” he said. “So our agreement is good as it sets boundaries and helps us keep peace.”

He claimed Wambui’s parents had given her their blessing, adding: “She is like the central referee. She can say whether she wants me or my colleague.”

Wambui, a widow and mother of young twins, is said to be in her late 20s. In a separate interview with Kenya’s Daily Nation newspaper, Mwendwa explained: “It’s not because she is a superwoman, but because she is a hard worker and very beautiful.”

The unusual arrangement came about after the intervention of Abdhallah Abdulrahman, a community policing officer. “The two men were quarrelling and I wanted to know what they were quarrelling about,” he said. “I found out they were sharing one woman without knowing each other. I wanted the woman to decide which she loved and agree to stay with one. Unfortunately, she refused to decide. She said, ‘I love both of them, I’m not ready to lose them.’

“Both men refused to surrender the woman. They assured me they’re going for a discussion where they’ll settle the differences themselves. They surprised me when they said they had agreed to be together.”

Abdulrahman said he was strongly opposed to the contract. “To me as a Muslim and a Kenyan, I don’t accept it,” he added. “It is against our religion and our African tradition. It is against Kenyan law. Under our constitution it is not allowed. The community are disappointed and everybody is against it. Sylvester Mwendwa is now in hiding, saying his life is in danger.”

Mwendwa’s willingness to publicise the contract in national and international media has also caused a rift with Kimani and Wambui, putting the whole understanding in jeopardy. On Tuesday the Daily Nation reported that Mwendwa, a butcher, said his boss fired him after he heard the story, and he is reported to have gone into hiding.

Even if Wambui forgives him, there is little prospect of making the three-way marriage legal. Whereas polygamy – one man with multiple wives – is legal in Kenya and widely practised by various communities, polyandry is almost unknown.

According to Kenya’s NTV station, the contract states: “We have agreed that from today we will not threaten or have jealous feelings because of our wife, who says she’s not ready to let go of any of us. Each one will respect the day set aside for him. We agree to love each other and live peacefully. No one has forced us to make this agreement.”