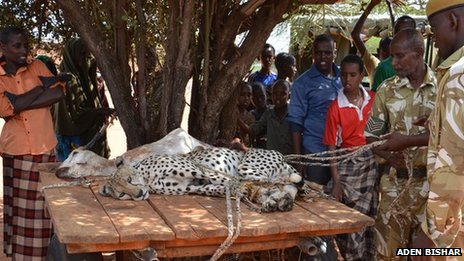 The Cheetah is the fastest animal alive

BBC– Four villagers in north-east Kenya have chased down and captured two cheetahs which were killing their goats.

The owner of the goats told the BBC that the cheetahs had been picking off his animals one by one, day by day.

The men waited until the hottest part of the day before launching the chase over a distance of four miles (6.4km).

The cheetahs got so tired they could not run any more. The villagers captured them alive and handed them over to the Kenya Wildlife Service.

“I need compensation from them because the cheetahs killed most of my goats,” Nur Osman Hassan told the BBC’s Somali Service.