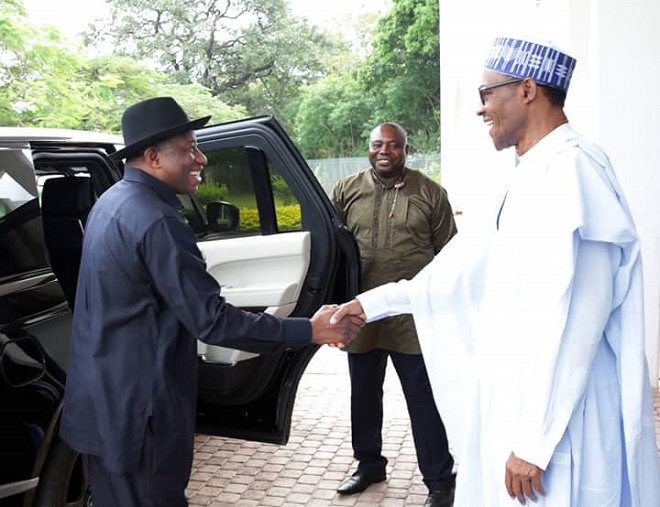 Original Caption: Did Obasanjo Just Throw Buhari Under The Bus?

One of the books President Buhari must have read, or should read, is Sun Tzu’s The Art of War. But of course, there are others. Why should he? Well, let’s defer this part of the discussion until another time. Here and now, however, let’s briefly talk about Obasanjo’s character and his unstated intention towards Buhari. At the very least, it seems to me that General Obasanjo is disappointed, and getting inpatient with Buhari and his administration.

In the eighteen or so months since President Muhammadu Buhari has been in office, no former president has visited Aso Rock as much as General Olusegun Obasanjo. He just couldn’t stay away. He wouldn’t stay away! And he made sure that the media knew, well ahead of time, of his goings and comings. Hence, the many still and moving pictures of him smiling and smirking — and a body language that say “I am the man: the kingmaker without whom nothing happens.”

Since 1970, at least, Obasanjo has been in the position (most of the time) to make things happen or keep them from happening. He gives, he takes; he creates, he destroys. And has gotten away wielding such power all these years.

In many of those pictures – especially those taken after March 2016 — you could see how uncomfortable Buhari looks. Many watchers of Obasanjo wonders about what he left behind in the Villa that necessitates his many visits. And of course, they also wonder why Buhari was always obliging him. You don’t see any of his predecessors parading left-right-left-right-left-right that many times in and out of the Villa. And you don’t see Jonathan doing same.

Not too long ago, I made a comment on my Facebook page, advising that Buhari should be wary of Obasanjo. But of course, Buhari need not listen to me. All he need do is recollect what Obasanjo did to President Jonathan. The criticism of Jonathan was not what bothered me (after all, I too criticized Jonathan and his administration two dozen times too many). It was the taunts. The abuses. The ridiculing. The undermining. The political uppercuts to the chins and jaws, and the knees to the groins that sickened me.

Other than pledging his livers and kidneys and heart, there was nothing Jonathan didn’t do to make and keep Obasanjo happy. Jonathan did this and that and that and this for Obasanjo, still, Obasanjo was not happy. Jonathan was on his knees, licking and kissing Obasanjo’s hands and feet; still, Obasanjo was not going to let Jonathan be. In the end, Jonathan was left naked on the altar. This was the lesson I thought Buhari would remember, and prevent a repeat. But apparently not!

As we approach the tail-end of November 2016, General Obasanjo is at it again. Only this time, his verbal arrows and political-daggers are pointed at President Buhari. Media houses across the country are screaming “Obasanjo attacks Buhari…” “Obasanjo goes after Buhari…” etc., etc. While Obasanjo may be correct in his assessment of Buhari and his administration, there was nothing he said during the speech he delivered at the First Akintola Williams Annual Lecture in Lagos, that he couldn’t have delivered in private.

There are times when one must be discreet. But strangely, he found it necessary to add to the president’s headache by lambasting him in a public forum. Obasanjo’s behavior is about power. It is about control. It is about hubris. Superciliousness, even. And it says a lot about the manner of man he is.

History will show that Obasanjo was responsible for, or worsened many of our collective problems. And from the day he truncated Chief Obafemi Awolowo’s presidential ambition in 1979, Nigeria has been on the path to damnation. And then he forced Yar’Adua on the country, and in the process helping to make a Jonathan presidency a reality. And while he was in office (1999-2007), he acted as if he knew it all. He didn’t give a shit about anyone or institution, but himself. It was all about Obasanjo.

But more than anything else, corruption, incompetence, waste and excesses became a part of our national/political culture. Obasanjo, along with General Ibrahim Babangida, were the grand patrons and granddaddies of all that went wrong with Nigeria. But today, he goes around pontificating and sermonizing. Ironically, the gullible are lapping up every word spoken by The King of Wrongs.

If President Buhari doesn’t know it, he should know it now: this is about 2019, about the next presidential election. The former president may have decided that the current president must go. And what better way to start the recall and or removal process. Now that Obasanjo has fired the first canon, others will join the bandwagon – unless of course there is great improvements in many of the promises that he (Buhari) made during the campaign season.

Whether he survives the Obasanjo onslaught or not, he (Buhari) must remember this: Obasanjo will not hesitate to throw him under a moving bus or moving train — or a moving ocean liner for that matter.  The thing with Obasanjo, especially when it comes to power, is that if you ignore him, he will make your life a living hell; if you embrace him, you’d suffer the same fate. So, the question many had had to content with (since the advent of the Fourth Republic) is this: what to do about Olusegun Mathew Okikiola Aremu Obasanjo.

How do you please him? The simple answer is that you can’t. Really, you can’t! OBJ is OBJ and OBJ doesn’t think much of his predecessors and successors. His arrogance is legendary. That he was going to mess with President Buhari was just a matter of time. And then there is Bola Ahmed Tinubu. Tinubu!

The Man from Daura must be smarter than these and six other men if the next presidential election is part of his future ambition. But more than anything else: he must curtail his incessant overseas travels to concentrate on our many national problems and challenges. If he doesn’t, well, Daura is not a bad place to retire to.