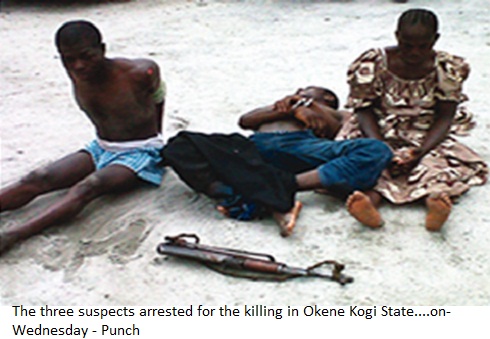 In the Central Senatorial district of Kogi State, another bloodbath was averted last Sunday following the intervention by security operatives.

What would have been a major tragedy in Kogi State was averted on the Eid- ul- fitr day, when security operatives scuttled what they said was a planned attack on worshippers at the eid grounds and churches in the Central Senatorial district of the state.

On the fateful day, Sunday, August 19, which was incidentally, Sallah, men of the Kogi State Police Command, arrested the leader of gang of suspected gunmen who have been terrorizing the area, while also discovering two bomb making factories in a major operation.

The two factories were located in Abu Limit Estate in Okene and Eyika Adagu in Okene and Okehi local government areas respectively.

At Eyika factory, 204 cans and chemical as well as other bomb-making devices were found in a room and parlour apartment said to be occupied by the gunmen. At Abu limit Estate in Okene, a police vest, a Quran and a sack of cans used for bomb-making were found inside a one room apartment of 3 block of story buildings in the estate which also serves as a factory where electrical poles are manufactured.

A resident of Adagu, who only gave his name as Saliu for ‘fear of the unknown,’ said they were shocked with the discovery as they had no premonition that such activities were going in the area.

“We only see them coming like every other person in the evening after the days’ job but we don’t even know that such activity is going on there. We thank God they were caught,” he said.

Meanwhile, Kogi State Commissioner of Police, Muhammed Katsina, while conducting newsmen round the factories, said information from the arrested leader of the 21-man gang who masterminded the attack on Deeper Life Bible and killing of the soldiers led to the new discovery.

He said after the attack on the soldiers, the police got information that the gang were at their training camp at Eter hill planning another attack and on sighting the police they opened fire on them. He said some of the gunmen were injured in the operation, while others escaped to a farm settlement in neighbouring Ondo State.

“Two of them were sent to somewhere within the North for more bomb- making devices, but were arrested throug intelligent report in a luxury bus at Jamata while returning to Kogi State with the materials.

“Through intelligence, the suspected gang leader was also arrested at a farm settlement in Ulowo in Owor, Ondo State after he was injured following a shootout with the police,” the police boss explained.

According to him, the gang planned to launch massive attack on Sunday which coincided with Eid- ul-filtr celebration before the arrest of their leader.

“They planned the attacks on the Deeper Life Church and the soldiers from their hideout in Eyika. Three persons each were detailed to attack the church and the soldiers respectively. The pastor was the target of the attack but because of confusion from church members as the gunmen entered the church, they started shooting indiscriminately, while also looking for their target. The attack on the soldiers was to get more arms and ammunitions preparatory for last Sunday and sallah attack,” he explained.