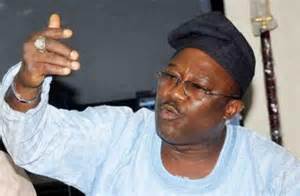 Barely 24 hours after a section of his supporters from the Kabba-Bunu/Ijumu Federal Constituency reportedly endorsed him for a dream third term, Senator Smart Adeyemi’s ambition to represent Kogi West beyond May 2015, suffered a severe blow in Yagba Federal Constituency.

In Yagba East, the political headquarters of Yagba Constituency, hell was almost let loose when angry and frustrated youth groups confronted Adeyemi for non-performance, alienation of his constituents and inexplicable arrogance since they invested their mandate in him in 2007 and 2011, respectively.

Before a bewildered Gov Wada & his deputy, Arc Yomi Awoniyi who is also from Yagba Constituency, they asked Adeyemi why it was his stock-in-trade to visit his constituents only when dignitaries were visiting.

They wondered why he routinely found cover under people who visited with elaborate security arrangements, if he had the courage and confidence to interact with his people on account of his scorecard.

Alluding to the non-implementation of his so-called ’empowerment programme’ for women and youths in Kogi West which was the highpoint of his campaign in 2007 an his failure to deliver on the township stadium he promised the people of Kabba in seven years of his stewardship, the youths vowed not to be deceived any further by Adeyemi and his backers.

They advised him to proceed to Ilorin the Kwara State capital where he owns two hotels, a fledgling construction outfit and an upcoming events centre and manage his investments at the end of his second term in 2015, since he does not conceive of any of the seven LGAs in Kogi West, worthy of investing in.

The youths lampooned Adeyemi for bringing innocent young people to their untimely deaths in the needless January 2011 protests in Okunland, when he promised to ensure the siting of the new Federal University in Kabba.

Adeyemi was warned to desist from taking ‘cheap credit’ as he is reportedly wont to do, for the recent award and commencement of the reconstruction of the Kabba-Mopa-Isanlu-Egbe Road. According to the youths, ‘We know our genuine leaders and we know for how long they have pursued the realisation of this project. ‘

They wondered why his often touted closeness to President Goodluck Jonathan and the powers-that-be in the current dispensation, have not translated into growth and development for his senatorial zone.

Adeyemi was given a thorough dressing down by the youths who booed, heckled and harassed him even as they taunted his police details.

It took the intervention of the host council chairman, Alhaji Funso Ganiyu Ibrahim and the state chairman of the Peoples’ Democratic Party, PDP, Comrade Hassan Salawu, both from Yagba East, to shepherd Adeyemi to his car and advise him to leave Yagba East LGA, to avert a bloody exchange.

All efforts to speak to Senator Adeyemi on the matter, proved abortive. His senior aide, Dickson Adeyanju was also not available for comments.