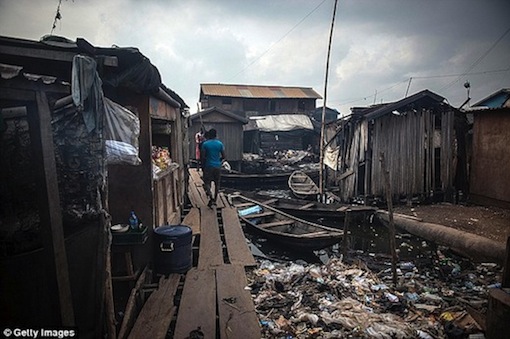 Lagos has been ranked amongst the worst cities to live globally following the ‘Global Liveability Ranking’, by The Economist Intelligence Unit (EIU) for 2015.

Nigeria’s most populous city Lagos was considered the fourth least (136) liveable city in the world on the list of 140. The survey took account of cities’ healthcare, education, safety, culture, environment and infrastructure.

Unsurprisingly, the Syrian city of Damascus – which has been ravaged by the country’s civil war – was last on the list of 140 major cities.

It was followed by Dhaka in Bangladesh, Port Morseby in Papua New Guinea, Lagos in Nigeria and the Libyan capital of Tripoli, which has also been the victim of an ISIS insurgency.

Melbourne was named the best city in the world to live in for the fifth year in the row while Vienna in Austria came second followed by the Canada cities of Vancouver and Toronto, and Australia’s Adelaide.

Melbourne again achieved a near-perfect score of 97.5 out of a possible 100.

“Those that score best tend to be mid-sized cities in wealthier countries with a relatively low population density,” the EIU report said.

“These can foster a range of recreational activities without leading to high crime levels or overburdened infrastructure.”

But the world has become a more dangerous place to live, according to the EIU report which said the global ‘stability score’ fell by 2.2 per cent over the last five years.

Several cities across the globe have suffered a decline due to recent terror attacks, ongoing conflict and general instability.

Another seven in eastern Europe, including Ukraine where Russian rebels are battling the country’s troops, have also become worse places to live.

The country’s capital, Kiev, saw the sharpest fall over the last 12 months and now ranks among the ten least liveable cities in the list.

Jon Copestake added: “The threat to personal safety, whether in the form of crime, unrest or conflict, has knock-on implications for other aspects of liveability.

“Last year, the conflict in Ukraine, the terror attack in Paris and austerity in Athens formed a sobering backdrop to regional liveability.”

Meanwhile, Moscow and St Petersburg’s scores were negatively impacted by Russia’s involvement in the Ukraine conflict.

The international community has imposed strict economic sanctions on the country. Meanwhile, its anti-homosexuality stance has meant many artists and tourists have boycotted the country as a tourist destination.

In western Europe, Paris and Athens experienced the sharpest declines. Attacks on the Charlie Hebdo offices affected the French capital’s ranking. It fell out of the top 20 cities into 29th place.

Athens has felt the force of Greeks crippling economic crisis and austerity, which has hindered other areas like healthcare.

The Greek capital, ranked 72nd, was the only city in Western Europe to fall outside the ‘top tier’ of liveability.

The ranking, which takes account of ‘lifestyle challenges’ in 140 cities worldwide, revealed that the average liveability across the world has fallen over the last five years, due to a ‘sense of global instability.

But several cities did buck the trend by registering improvements in scores since 2010.

Culled by PMN from TheMail