Lagos Government Has Not Returned Our Land As Falsely Claimed, Say Ibeju-Lekki Villagers 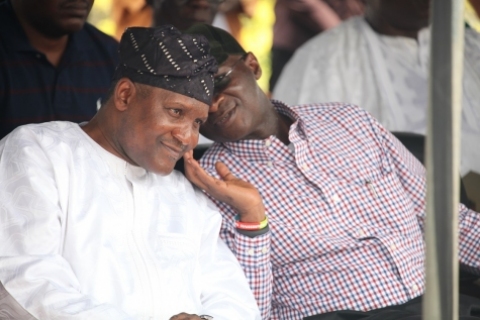 Inhabitants of Idasho Community and nine other villages in Ibeju-Lekki council area of Lagos State have written to Lagos State Governor, Babatunde Fashola, to refute published claims that the state has returned 750 hectares of land and handed C of O’s to residents of the troubled area.

Governor Fashola threatening Ibeju-Lekki land owners during a meetingThe letter, which opposed the false impression of calm apparently to attract more investors, was attached with the published page on The Punch of Thursday 19th June, 2014.

Allegedly sponsored by the Lagos State Commissioner for Commerce and Industry, Mrs. Olushola Oworu, the story is believed to have been motivated by her private business interests in the disputed land area.

Mrs. Oworu and her husband, SaharaReporters learned, are key shareholders in the Lekki Free Zone Company, a private liability company that appears to have a mission of taking over every unused land within the Lekki zone and selling out to investors without recourse to owners.

At a recent meeting with residents and leaders of the community, Oworu was credited with convincing billionaire businessman, Alhaji Aliko Dangote, to site his petro-chemical business in Ibeju-Lekki, where vast areas of land had been earmarked for him by the Lekki Free Zone Company without due consultations with the inhabitants.

Fashola had used the meeting to threaten the residents, after they were not enticed by the presentation of the businessman, Mr. Aliko Dangote to them in very contemptuous manner (Fashola’s threat can be watched here https://www.youtube.com/watch?v=xo4jCXuMCrk).

In their joint letter to the governor, the community also refuted claims by the state government that certificates of occupancy had been issued in respect of the purportedly returned lands. They maintained that no single person in the community had heard about such, let alone received the certificates, except for coming across it with amazement on the pages of newspaper.

Following the publication, some residents told our correspondent that more foreigners, mostly Chinese, are now moving into their community with demolition equipment.

A landlord in the area suggested that the publication in Punch Newspaper as sponsored by Mrs. Oworu might have motivated the strangers to move into their land.

One instance of farmland clearing by a team of Chinese men was reported last week, after which the men were challenged and their leader offered to pay for the destroyed plants on the farm. However, he did not offer to pay for the land itself, which he claimed was given to him by the Lekki Free Zone Company, with the endorsement of the Lagos State Government. After his offer to merely pay for the destroyed plantation was rejected, he has not returned to the land.

Meanwhile, as part of a late and desperate move to get the inhabitants out of the way for the investors who have paid the Lekki Free Zone Company for the land, cutting through some 10 villages, officials of the Land Use Agency in Lagos State visited the community late last week.

The Lagos State’s Land Use officials had taken some of villagers (whose land are now to be affected) out to another location about five miles away from their own residence. They were told to immediately resettle in the new location to enable investors properly take over their initial residences for business. However, inhabitants at the new locations rejected the re-settlers, advising them to return to their own land and claim it.

In their correspondence, the inhabitants demanded clarification and fair approach to them by the state government and others seeking to forcefully take over their lands.