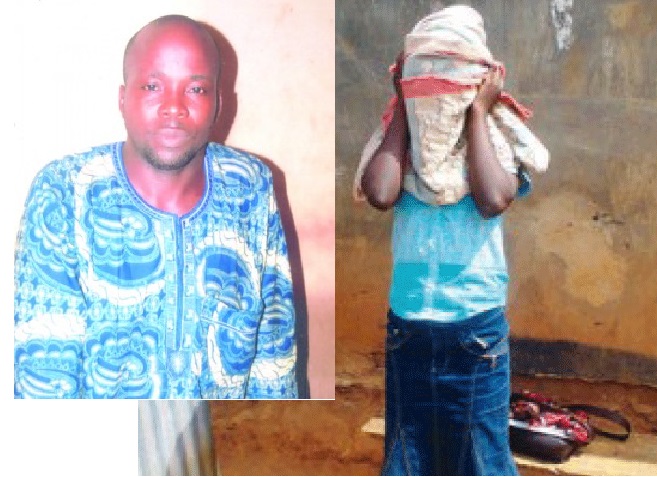 Policemen attached to Ikotun division in Lagos have arrested a man alleged to have been having carnal knowledge of his two daughters between the ages of 10 and 13, in the past two years.

His daughters reportedly claimed to have been going through what they described as horrible experience since their mother left them for another man.

Unable to resist their father, they endured until the elder girl confided in her friend’s mother, who then contacted some child rights groups.

The organisations were said to have effected the man’s arrest at his 29, Omooye Street, Abaranje, last Saturday and handed him over to policemen at Ikotun division.

Explaining, the elder child (names withheld) said: “Our father started it when I was 11 years old. I did not know he was doing same to my sister who was then eight years.

I only got to know when I saw her blood stained undies and when I demanded to know whether she had started seeing her monthly flow, she revealed that our father slept with her the previous night. He usually crept to either of us at night whenever he wanted to satisfy his urge. He was the one who dis-virgined us.”

I beg to be forgiven —Suspect

On his part, the 35-year-old suspect, a commercial bus driver identified as Adewale Adeleke, admitted to the police that he committed the sacrilegious act. He claimed, however, that he did not know what usually comes over him at that point.

Hear him: “I beg to be forgiven. This is the handiwork of the devil because I do not know what usually comes over me. What usually happened was that the urge would just come and before I know it, I would be with either of them.”

When news of the act reached the mother of the children who resides in Ibadan, the Oyo State capital, she reportedly rushed to Lagos, where she was quoted as saying that she was shocked beyond words.

She reportedly said she was forced to leave her husband because of alleged battering, in spite of the fact that she was the one responsible for the upkeep of the home. She said while leaving, she handed her two children to her mother with the intention of sending them monthly allowance, only for their father to go and take them.

Executive Director of Esther Child Rights Foundation, Mrs. Esther Ogwu, said her foundation was making effort to ensure that the woman would take custody of her children, adding also that the arrest of the suspect was a first step to ensure that justice was done.

The two girls are now under police protection while their father will be arraigned at the Ejigbo Magistrate’s Court by the police.

When contacted, Lagos State Police Command, Public Relations Officer, PPRO, Ngozi Braide confirmed the arrest of the suspect, saying that he would be arraigned in court soon.

Our father defiled us

The 35 old bus driver who lives at No. 1 Oduronye Street, Ikotun, in Alimosho local government area of Lagos now cooling off in police custody abused fatherhood by defiling two of his daughters.

The girls alleged that their father had been sleeping and having sex with them for two years.

The daughters, who were closed to tears by the despicable act, lamented at the Ikotun police station that their father had been sleeping and having sex with them since 2011 without the knowledge of their mother who had separated from their father last year.

The girls are 13 and 10 years. The eldest of them (name withheld) alleged that their father had been sleeping with her when she was 11 years and her sibling when she was eight years old and that it was her father who deflowered her.

She further alleged, “Our father sleeps with us frequently and he releases inside us. The first time he slept with me, I saw blood coming out of my private part and he used singlet to clean me up.”

The cat was let out of the bag when the Vice Chairman, Freelance Broadcast Association of Nigeria, Lagos State chapter, Demola Olota; Mrs Esther Ogwu of the Esther Child Rights Foundation and Mrs. Mary Olasupo of the Compassionate Women body arrested the alleged culprit and handed him over to the police.

The randy father who did not deny having sex with his two daughters pleaded with the children and the society to forgive him.

Adeleke now remorseful for his sins blamed the act on the devil, admitting that he just felt like having sex with his daughters whenever he had the urge.

When contacted, Police Public Relations Officer, PPRO, NgoziBraide confirmed the arrest of the suspect, saying that he would be arraigned in court as soon as investigation was concluded.

In a related development, a Federal High Court in Lagos has ruled that YesiruOnajobi50-year-old farmer, be remanded in prison for allegedly raping his 14-year-old daughter.

Onajobi, a resident at Bogije Stree, Ibeju-Lekki, Lagos, is standing trial on a two-count charge of unlawfully having carnal knowledge of his teenage daughter and he is being prosecuted by the National Agency for the Prohibition of Traffic in Person (NAPTIP).

He pleaded not guilty to the charge.

But the trial judge, Justice ChukwujekwuAneke, ordered that he be remanded at the Ikoyi prisons while adjourning the matter to October 21, for hearing of the bail application of the accused as well as his motion challenging the court’s jurisdiction to hear the suit.

The accused was first arraigned before retired Justice Benedicta Molokwu of the court, in September 2012, but the matter was re-assigned to the new trial judge following the retirement of the judge.

The prosecutor, MrsKehindeFaladeinformed the court that the accused was arrested on January 20, 2010.

She stated that the accused intimidated and forcefully had carnal knowledge of the teenager, who eventually became pregnant.

The offence is said to have contravened sections 13 (1) and 18 (a) of the Trafficking in person (Prohibition) Law Enforcement Act 2003.