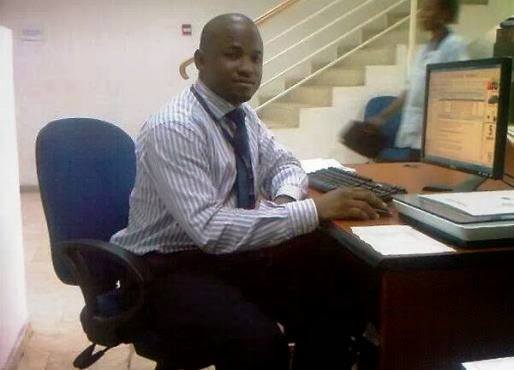 “MAN’s INHUMANITY TO MAN”, THIS IS REALLY VERY VERY SAD!

Tunde Oke, a staff of Ecobank was arrested on Tuesday 18th of February, 2014 by the police for an allegedly missing 1.2 million Naira in the bank. Tunde, whose arrest was instigated by Ecobank was taken to the station and tortured to death.

He is survived by two kids,( a 2 years old boy and a 5 months girl),a young widow, an aged mother and siblings

Tunde was accused of a missing 1.2million from Ecobank, Ladipo Branch where he worked sometime late last year. He was asked to refund the money amount.

According to Tunde, someone posted the money with his system. However Tunde made efforts to repay the money, his account was put on hold and that of his wife who works with the bank was also put on hold. (they could no longer make withdrawals from their Accts). Tunde was able to to repay 600k before d events that led to his arrest.

On Sunday the 16th of Feb, Tunde had a fire accident in his residence, his generator exploded, leaving burns in his hands and legs. Tunde went with the burns to the office on Monday to show his branch manager and explained the fact that he won’t be able to stay at work for the day.

On Tuesday 18th Feb, Tunde was on his way to clinic and some concerned staff of Ecobank called his wife to inform her that they were coming to arrest her at her branch since the husband has absconded. She quickly placed a call to her husband to inform him and her husband reported immediately to work abandoning his treatment due to the threat.

Tunde was arrested at work on Tuesday and taken to the divisional headquarters at Ikoyi where he was locked up for 3 days. All efforts to get his bail went futile as the police insisted that based on d instruction of the bank, they must get the outstanding.

His lawyer was asked to bring 1 million and he told them bail was free and he can’t raise such. In the course of the argument, the police escalated the debt to 2.4 million and the lawyer reminded them he only had an outstanding of 600k.

Tunde was tortured as usual by the police in the cell and on Thursday morning his mother in-law and brother visited the station, but was again urged by d police to quickly go and get money. They went to use the ATM and on their way back, they saw an ambulance and wen they peeped into it, they saw Tunde’s cloths drenched in blood, his mouth foaming and it was also discovered later that a coke bottle cover was placed in his pocket. The police started alleging poison that he took a poisonous coke.

Now am wondering, poison from where? This is the story so far. We are waiting for autopsy results but the media must be at alert… ECOBANK will be doing all they can to bribe as many as possible ….ANYONE WHO TAKES BRIBE ON THIS ISSUE WILL DIE A MISERABLE DEATH