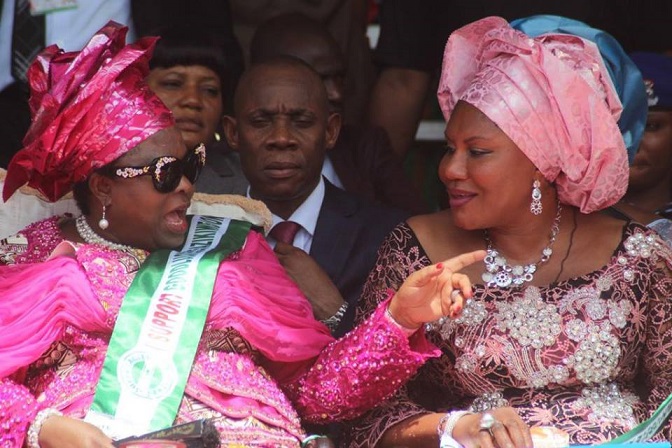 Last minutes looting of government assets is going on. With about six weeks to vacate their offices, top officials of the Goodluck Jonathan’s administration  have embarked on a looting spree, selling off priced government properties to themselves at ridiculous and scandalous prices.

To further compound the impunity of the Jonathan’s administration, a building allocated to Nigeria’s anti-graft police, the EFCC and has been used for intelligence operations since the days of Nuhu Ribadu and later Farida Waziri, as heads of the organisation, has been taken off from the current head of the agency, Ibrahim Lamorde by the First Lady, Dame Patience Jonathan and allocated to her police ADC, Assistant Commissioner of Police, Uche Ifeanyi.

An aggrieved top presidential aide who confirmed the last minute sharing of government properties located within the presidential Villa in Aso Rock, high brow areas of Abuja; Wuse 2, Asokoro and Maitama; as well as in places in Lagos; Victoria Island, Ikoyi, Apapa GRA and Ikeja GRA, disclosed that the Secretary to the Government of the Federation, SGF, Senator Anyim Pius Anyim is the one coordinating the looting and sharing exercise.

It was further learnt that as part of deliberate and well-coordinated efforts under the supervision of Nigeria’s controversial Attorney General and Minister of Justice, Mr.Mohammed Bello Adoke (SAN), to cripple the EFCC soon after its immediate past chairman, Farida Waziri was relieved of her position. Lamorde largely seen as weak and docile was summoned to the villa to surrender the keys to the building located at No.15 Ibrahim Taiwo road within the Aso Villa. A source said “He was not even allowed to remove the EFCC furniture in the building.”

The building was subsequently allocated to Mrs Jonathan’s ADC to live in. To seal the act, the property which is a seven bedroom duplex with two bungalows is now being given to the First Lady’s aide to buy at less than the price of the furniture in the building. 3 bedroom duplexes that are 88 in number located National Defence College quarters in Apo zone C, currently occupied by Staff and Course participants, has also been shared by the minister of FCT Alh. Bala Muhammed, signed and back dated late Thursday night.

The scandalous looting is also being carried out in Company names to hide the identity of the looters. A source also disclosed that apart from Mrs Jonathan’s ADC, Ministers, President Jonathan’s aides, friends, associates and top military brass are also the main beneficiaries of the ongoing hurried sell-off of government choice properties across major cities.

Further details of who has bought or is buying what in the mad looting going on in Abuja will soon be made public.