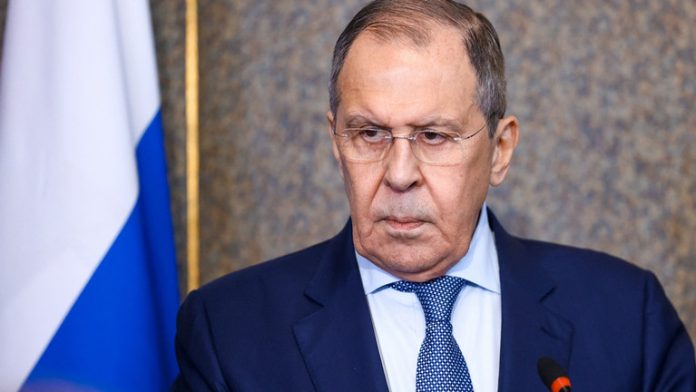 Russia will not engage with Ukraine based on President Vladimir Zelensky’s “peace formula,” as the terms are unacceptable, Foreign Minister Sergey Lavrov said on Thursday, reiterating that Moscow has not refused to engage in talks in general.

The foreign minister told RIA Novosti that “obviously, Kiev is not ready for dialogue.”

“By putting forward all sorts of ideas and ‘peace formulas,’ Zelensky cherishes the illusion that, with the help of the West, he will be able to achieve the withdrawal of our troops from Russian territory in the Donbass, Crimea, Zaporozhye, and Kherson Regions, the payment of reparations by Russia, and that it will ‘give itself up to international tribunals,'” Lavrov said. He went on to say that Moscow “will not talk to anyone under such circumstances.”

However, citing previous rounds of talks with Kiev, the minister went on to say that Moscow has not refused to resolve the conflict through negotiations.

“Vladimir Zelensky proposed sitting down at the negotiating table immediately after the start of the special military operation. We did not decline and agreed to meet with his representatives,” Lavrov said, adding that the talks demonstrated that reaching an agreement is not an impossible task.

However, the diplomatic process that began in February “demonstrated Zelensky’s complete lack of independence in making important decisions,” according to Lavrov. “Already in April, at the request of the Anglo-Saxons, who wanted to keep the fighting going, he quickly wrapped up negotiations and sharply toughened his position.”

Earlier this month, Zelensky proposed a UN-sponsored “Global Peace Summit” in February 2023, with a ten-point “peace formula.” The plan calls for the withdrawal of Russian troops from all Ukrainian territories and the restoration of the country’s “territorial integrity.” Foreign Minister Dmitry Kuleba, however, stated that before the talks can begin, Moscow must appear before a “international court” and be prosecuted for alleged war crimes.

Dmitry Peskov, the Kremlin’s Press Secretary, claimed on Wednesday that the plan ignores reality on the ground. He was referring to the results of referendums held in the Donetsk and Lugansk People’s Republics, as well as the Kherson and Zaporozhye Regions, all of which overwhelmingly voted to join Russia this autumn. Following the Maidan coup in Kiev in 2014, Crimea did the same.