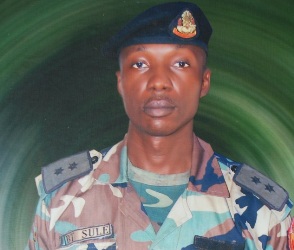 “I learnt about my son’s death on an online newspaper called Sahara reporters and up till know, the army authorities have not said anything to us about his death, we want the corpse of our son, husband and brother brought back to us here in Kaduna so that we can say farewell,” the father of late Captain Benjamin Toyi Sule, Mr. Sulieman Yusuf,cried out when our correspondent visited his home this week.

The 63-year-oldretired civil servant, who was executive director of the Agency for Mass literacy, said Benjamin, the first child of the family, was killed in Bama, Borno State after he and 10 othersoldiers were ambushed by insurgents in Danbawa town.

Giving an insight into how Benjamin lived and died, he saidBenjamin who was born on May 5, 1978, got married eight months before he met his death. He joined the military in 2008 after he obtained a degree in Town Planning at Ahmadu Bello University (ABU), because he of love country.

“He felt he could do better with the military so he opted to go and join the Short Service Course (SSC) and he had the option to choose the Direct Short Service (DSS) which is professional and combatant but he chose combatant course as he felt that was the best he could do to serve the country,” a distraught Yusuf told Weekly Trust.

“He joined the army immediately after his course at the Nigerian Defence Academy (NDA), he was taken to Ikom in Cross River State, where he served for one month after which he was taken at the heat of the Aba kidnapping and armed robbery where he served for two years, when Aba had settled, on his return to Ikom, he was sent to Liberia. As soon as he came back from Liberia after six months he picked a wife on 30th November, 2013, thinking he was going to be around for sometime,” the slain officer’s father narrated.

But as he thought he was going to settle down, he was transferred to Bauchi, where his commanding officer released him to attend a two- week course. Shortly after his return after the course, he was asked to move to Bama between 5-10 February, Yusuf said.

“He was serving with the Armoured Corps, and was given four armoured vehicles to move to Bama, the vehicle that will carry the armoured cars was not in good condition and normally, when they send armoured cars, they have accessories, including smaller guns, but my son was not given those accessories, he took that risk to Maidiguri, he was informed that when he gets to Bauchi he would be given those guns but at Bauchi he was asked to move to Bama without the guns, he even argued with a Colonel there on the issue asking the Colonel if he would send his son to Bama without the adequate weapons and at 6pm knowing fully well the town was hot at that time,” the bereaved father recalled.

“He was allowed to take off the following day, as Captain, after being promoted in July, 2014, he was the head of the team and he was there for six months as he went in February, he told us he had escaped attacks three times, unfortunately, in Damboa town which has been occupied by the insurgents, an ambush was laid on my son and his men numbering 11 and they were killed by the insurgents between 2nd and 3rd of August, 2014,” he told Weekly Trust.

“I am happy because my son knew what he was getting himself into and he knew he could either come back home to his family or die on the battlefield because he signed for it, but my pain is for over 10 days after my son was killed no one from the army has called or knocked on my door to tell us how my son died or this is the arrangement for his burial, I got to find out he was dead on Saharareporters, they placed pictures of his wedding day and the story was told there, my picture as well as his mother’s was placed in the story but up till now, the army has said nothing to us,” Yusuf said with sadness.

“I would have been very happy if they told me my son fought a gallant fight…In developed countries, when a soldier dies, he is a hero, if everybody refuses to join the army, we do not have security, the insurgents would have consumed all of us,but somebody sacrificed his life, I am not sad because he’s dead, some people die as drivers, some as cooks, some as armed robbers, but my son died serving his country, it is only fair to tell his next of kin, his community because they love him and they are proud of him so bring him to his home state, if they cannot bring him to my house and bury him, do not bury him there and say you gave him honour, it is wrong and it is repugnant to natural justice and good governance, I don’t know if they have buried him because no one has told me anything and I cannot just start going to Maidiguri because it is not safe,” he added.

He army authorities to let the late Benjamin’s family know where their son’s  corpse: “Let them bring back his body, if they cannot give it to me, let them bury him in any military cemetery in Kaduna, his home state, as it will be greatly appreciated and it will not stop my children from joining the army, we are now more disturbed not seeing his dead body, we signed he can die but we did not sign that he can be buried anywhere moreso at the war place, more so a mass burial, when we did not see his body, even his wife who he married just six months ago has not seen her husband’s body.”
Yusuf added that: “I am lucky because he was a gentleman among the four children, he took after me, he is a disciplinarian, a quite person, a jovial person and he loves people, he found it very easy to make friends, he doesn’t drink and was a true Christian.”

On her part, Benjamin’s wife, Mrs. Asabe Sule, said: “The loss of my husband eight months after our wedding is very unfortunate, very painful that the nature of his job could not allow us enjoy our marriage and it’s so painful, because it even led to what has happened that is, his death.”

The young widow recalled: “Before I married him, I knew he was an army officer, but I did not really expect that he would die now. Our marriage was quite brief even though we courted for about two years, but it will forever be a memorable one, an unforgettable one, he was so dear, so loving and all he wanted was to make me happy.”

Asabe, a lecturer at Nuhu Bamalli Polytechnic, Zaria, recall ruefully that late Capt. Benjamin came home on a pass in June. They young couple met in Zaria where the widow resides: “The memorable thing about him is how he told me he will be coming back home finally in August, he said he will go back but that he will come back home finally in August, I did not know he meant he will be going beyond.”

She described her late husband as a gentle and peace-loving man who did not like trouble: “When we saw a story about his death on the internet, we made our own contacts to confirm if the story was true and it turned out to be true, but unfortunately, we are still waiting for the army to tell us so.”

Asked how life is without him, she said: “I don’t know if I have started living without him because I have people around me, his family and friends are here to comfort me, the problem will be when I go back to Zaria and I am all alone.”
His 52 year-old mother Ladi Rhoda Sulieman said: “I am feeling so bad, that being the first born, I had entrusted everything to, he has been a child that you can trust and rely on, a promising child, we work like a team in our family.

To Mrs. Esther Sylvester, wife of Corporal Sylvester Moses, August 4, 2013, would ever remain green in her mind. “On that fateful day, my husband, father of my three children and breadwinner of my family, was snatched by death leaving me to face the hardship and realities of life alone,” the widow said of her husband who was slain by Boko Haram insurgents. They were married for 13 years.

“When my husband was alive and in Maiduguri, I was always crying because I knew that in a matter of time, I will be made a widow because of the rate at which soldiers are being killed by the insurgents. It was a very traumatic period for my family, but now, at least, we know he is dead and is resting in the bosom of the Lord. All we can do is pray for him and also pray that the reward of his sweat be paid to us so that life can be a little easier for us even though it can never be easy as it was when he was alive,” she added.

“I do not have any real source of livelihood as all I do are menial jobs that just fetch small money which I use to feed myself and my children as well as pay their school fees,” Mrs. Sylvester said, adding that she has not received the late corporal’s entitlements which could have helped her in the upkeep of the family and payment of school fees.
“Whenever it is first term, my heart skips a beat because I know I have to raise a lot of money to send my children to school now that I know their father is not alive,” she lamented.

“Education is a necessity, even if these children go to the farm, they will still need education to manage the business so that it becomes a success and they can also contribute their own quota to the development of the barrack community, the state and the country at large,” Mrs. Sylvester noted.

It is her hope that the sacrifice that claimed her husband’s life would not be in vain as she urged the military authorities to urgently set machinery in motion towards ameliorating the suffering of families of soldiers, who have lost their lives in the war against terror.