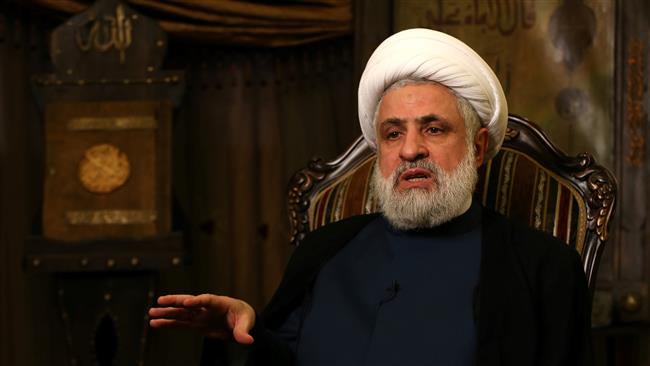 Hezbollah has warned Saudi Arabia that Lebanon is not to fall under Riyadh’s tutelage, despite the kingdom’s piling pressure on Lebanese officials to apologize for their stances.

Saudi Arabia retracted a $4 billion aid pledge to Lebanon last week and demanded apology later after Foreign Minister Gibran Bassil refused to back a motion crafted by the kingdom against Iran.

“Lebanon will not be a Saudi emirate or a non-Saudi emirate,” Hezbollah Deputy Secretary General Sheikh Naim Qassem said on Friday.

“No one should think we would reject the creation of a Saudi emirate, but accept another,” he said.

On Friday, Saudi Arabia imposed sanctions on four Lebanese firms and three individuals it accuses of having links to Hezbollah.

The kingdom has ordered its citizens not to travel to Lebanon. There are also reports that Saudi Arabia may expel the Lebanese working on its territory.

‘Waiting for a chance long before’

He said Riyadh had been waiting long before for a chance to attack Lebanon in one way or another and was now seizing on the opportunity.

“In reality, this was an opportunity. They wanted to attack Lebanon and Hezbollah, and everything this country and its people have achieved so far,” Qassem said.

Several Lebanese ministers have likewise dismissed an apology, while Prime Minister Tammam Salam has called on the country to unite in the face of Saudi pressures.

“We committed no wrong for which to apologize,” Minister of State for Parliamentary Affairs Mohammad Fneish said during a Thursday cabinet meeting.

Industry Minister Hussein Hajj Hassan also said, “I don’t understand this great equation: we either apologize or we must bear a collective punishment.”

The diplomatic dispute, however, has divided Lebanon and pro-Saudi politicians, including former prime minister Sa’ad Hariri, have called on Lebanese leaders to mollify Saudi Arabia.

Prime Minister Salam is to visit Riyadh in an attempt to placate the kingdom.

“Salam’s visit to Saudi Arabia at the head of a delegation will crown a solution that satisfies the kingdom,” Lebanese Information Minister Ramzi Joreige said.

Some local media reports in Lebanon have said the Saudis may be applying pressure to secure the release of a member of the royal family held in Lebanon since October on drug charges.

Abdul-Mohsen al-Waleed Al Saud was detained in Beirut after authorities seized two tons of amphetamine Captagon pills before they were loaded onto his private plane.

On Wednesday, a Lebanese prosecutor indicted Al Saud of dealing and using drugs.

Other analysts suggest Saudi Arabia may be seeking to compensate for its declining hold over Lebanon.

Saudi Arabia’s influence has been dwindling in Lebanon since early 2011 when Sa’ad Hariri was ousted.

For the past two years, the Saudi-backed March 14 coalition has failed to see one of their leaders elected president. Now they are nominating legislator Suleiman Franjieh, a close ally of Hezbollah, for the country’s top job.

Meanwhile, Hezbollah is boosted by recent victories in Syria. The resistance movement is fighting alongside the Syrian army against Takfiri militants supported by Saudi Arabia and its allies.

“Saudi Arabia is feeling for a good reason that its influence in Lebanon is on the decline,” said Ayham Kamel, a Middle East expert with the political risk and consulting firm, Eurasia Group.

“The Saudi message is don’t think you can translate victories in Syria and control the system in Lebanon. We have plenty of leverage through our economic muscles,” Kamel told the Associated Press.