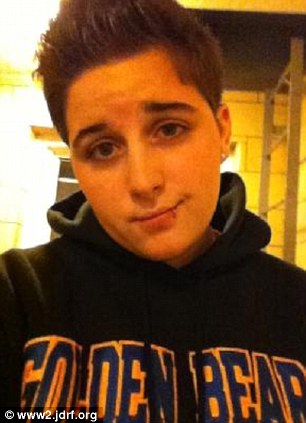 DailyMail– A lesbian student has been kicked out of college and arrested after it emerged she was behind a string of anti-gay messages slipped under her dorm room door, police said.

After the notes were found in Alexandra Pennell’s room at Central Connecticut State University in March, hundreds came out in support of the student at a campus rally against hate crimes.

But when police hid a camera along the hallway outside her room, they allegedly caught her leaving the notes herself – and she admitted she had written them to get the attention of her roommate. ‘Caught’: Alexandra Pennell allegedly wrote anti-gay notes and slid them under her door, claiming she was the target of a hate crime. She is pictured at a campus anti-hate rally, sparked by the notes

She now faces charges of fabricating evidence, lying to police and making false statements. She has also been barred from attending any state university for five years, the Hartford Courant reported.

It comes after Pennell, 19, reported to campus authorities that she had found the anti-gay notes scrawled on a board on her door and slipped into her room.

Authorities took the report seriously and police were called in to investigate. On March 13, hundreds of students attended an anti-hate rally where Pennell addressed the crowd.

‘All I have to say is that I’m not going to be run out of my home, and I will not be intimidated by hate,’ she said at the rally. ‘Attention-seeking’: Pennell told police she slid notes into her dorm so her roommate would pay her attention. She has now been kicked out of college and barred from colleges in the state for five years Speaking out: Pennell is pictured speaking at an anti-hate rally sparked by the notes found in her dorm

She reported the first note on March 7 and police immediately launched an investigation. Six days later, she told police she had found another note after returning from the shower.

But a video surveillance system placed in her room to identify the person behind the notes had been disabled just before the note was slid under her door and police found that a cable had been pulled out of the device.

Pennell suggested she may have pulled out the cable when she opened a desk drawer, but when police reconstructed this possibility, they were unable to dislodge the cable.

So without letting her know, Lt. Edward Dercole of the CCSU police placed another camera in a hallway closet and watched as she allegedly slid a note under the door herself. Standing up: Hundreds of college students and staff attended the anti-hate rally in March Serious: Police also immediately launched an investigation to find out who had sent the notes

When police first confronted her about the notes, she insisted she was not behind them.

She told police she had faked them to get the attention of her roommate, Siobhan Dooley. She said she hoped the incidents would make Dooley spend more time with her.

Pennell also wrote a letter to Dooley in which she allegedly said she left the notes as she feared her close friends were slipping away, the Courant reported.

She added that she continued leaving the notes because of the attention it brought her. Scene: When authorities set up a hidden camera in the hallway, they allegedly caught Pennell slipping a note under her own dorm room door, pictured Anger: Pennell has now been kicked out of Central Connecticut State University

Pennell was arrested on May 2. She has been free on a written promise to appear in court.

The university said it is saddened by the student’s actions.

‘We remain proud, however, of the campus community’s response to what we believed was an act of bias, and we reaffirm now what was said then: Acts of bias and hate will not be tolerated at CCSU,’ university spokesman Mark McLaughlin said.