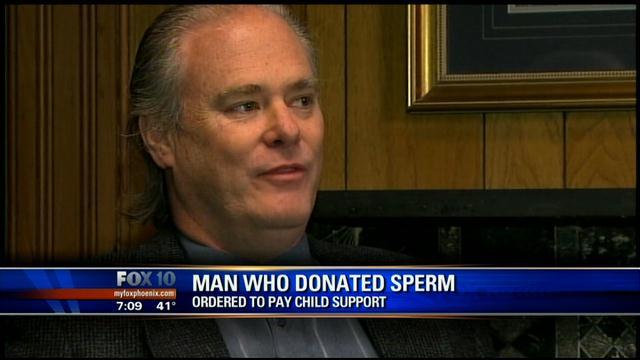 NewsRescue– In a most fascinating legal and ethnic story, a Lesbian woman was granted child-support by Kansas state from her sperm donor.

It all started when the Lesbian couple put up a Craig’s list ad seeking a sperm donor. William Marotta of Topeka who saw the ad in 2009 decided to donate his sperm and gave the couple 3 cups of it, according to CNN. He signed papers with the lesbian couple to not be charged with any responsibility for the child.

Fast forward, three years later, the lesbian couple had split ways, and the artificially impregnated mother according to the tale suffered from some illness. Now, it would be expected as occurs in straight couples, that the woman seeks child-support from the defunct partner, but not in this case. The mother went to the state for help and they decided to fine William to pay child support for the three year old boy.

“I donated genetic material, and that was it for me,” he told CNN affiliate WIBW.

Kansas state child department claimed that Marotta by not donating the sperm via a physician, was the father of the child and hence culpable for his welfare.

CNN: But under Kansas law, he is her father. Had a physician carried out the insemination, that would not be the case, because Marotta would be able to document that he was a sperm donor and not the lover of the girl’s mother, said CNN Senior Medical Correspondent Elizabeth Cohen.

“For all they know, they were lovers,” she said. “They need that documentation. He’s the dad; he ought to be paying up.”

Though a physician would have tested the sperm for sexually transmitted diseases and certain genetic disorders, there are disincentives associated with going through a physician.

A single attempt at artificial insemination costs about $3,000, and sometimes several tries are needed. “It’s a lot cheaper to get someone to come on over with their donation, and then do it yourself at home,” Cohen said.

Meanwhile, Marotta owes legal fees and has taken his story to the news media. “If enough noise gets made about it, at this point, maybe things will change for the better,” he said. Read more…

This story simply provokes much thought about all aspects of it, ranging from Lesbian relationships trough sperm donation, to child support laws.

In a case in Kansas in 2008, the court ruled on a father who was battling to be allowed to pay child support for his child through sperm recipient, the Kansas courts ruled that unless a written agreement between the donor and recipient stipulates such, the donor can not be accorded the right to support his child.

Sperm Donor Fights for His Rights as a Father in U.S. Supreme Court

Mr. Hendrix initially petitioned the Shawnee County District Court in Kansas to afford him parental rights and provide for his son and daughter financially. Ms. Harrington countered by filing a paternity action. Mr. Hendrix testified that he and the mother, Ms. Harrington, had an oral agreement to co-parent their children together. Both of those cases were dismissed by a district court judge, prompting Hendrix to appeal the decision in the Kansas Supreme Court. The Kansas Supreme Court decided, 4-2, that a sperm donor must have a written agreement with the mother in order to exercise any parental rights. That decision annihilated Daryl’s inherent rights as a father and treads dangerously on redefining fatherhood.

In the case, his layer fought hard, stating:

“This case will have significant ramifications on the future of fathers’ rights and reproductive technology. When we reach a point in society when a father has been reduced to nothing more than a genetic vending machine, then we have reached a point of hopelessness for our children. We should be encouraging fathers to be constant figures in their children’s lives instead of legally baring their fundamental human right to parent,” states Leving, “we must not forget that any man’s loss of his children diminishes mankind,” he added. Read more…

The case of Daryl Hendirx is of particular interest, because in his case, which he desperately fought for parenting rights, in contrast to the above lesbian case, Hendrix and Harrington had nothing in writing. Whereas in the current case, the donor actually has signed documents. in 2005, Hendrix merely handed Samantha Harrington the bottle of sperm which she took to the hospital for insemination.

The twins’ mother, Samantha Harrington, said the father was not welcome. Hendrix was surprised. Nine months earlier, he’d handed Harrington, a longtime friend, a container of his sperm to take with her to a fertility doctor. According to Hendrix, the two prospective parents-she, an unmarried attorney; he, an unmarried businessman-had an oral agreement to share custody should Harrington conceive. She denied this.

Hendrix then filed his own petition to establish his paternity status. He requested joint custody and a visitation schedule with the children.

Several days later, Harrington filed again, this time invoking a 1994 Kansas statute stating that a man who donates sperm is not viewed as the legal father unless it’s agreed to in writing. The fact that Kansas sperm donors even have an opportunity to “opt in” to parenthood through a written agreement is unusual, says Joan Heifetz Hollinger, a family law expert at the University of California, Berkeley School of Law, who supported Harrington’s position. In most states, there are no such options. “If you provide sperm to a woman other than your wife,” Hollinger says, “you are not the father.”

Harrington, now 35, and Hendrix, 47, agreed on one thing: They had nothing in writing.

She next motioned to dismiss his petition because, under Kansas law, he had no standing to file it-he was a sperm donor and nothing more. In December 2005, the Shawnee County District Court agreed: “Hendrix is found not to be the legal father.”

Hendrix took it to the next step. A year later, he sat in a wood-paneled courtroom in the Kansas Supreme Court, hoping to overturn the lower court’s decision. Flanked by a large group of friends, Hendrix listened as his legal team argued that the donor statute was unconstitutional because it denied Hendrix his “right to care, custody, and control of his children.” Hendrix’s attorney also cited the mother’s petition, which referred to Hendrix as the “father” 87 times.

Hollinger and 20 other family law professors filed a friend of the court brief on behalf of Harrington, arguing that Hendrix’s rights hadn’t been violated, because the legislature had made it clear that he didn’t have any: “He is not a legal father unless he and the mother agree otherwise in writing.” At the hearing, Harrington’s attorney said as much to the judges: Hendrix, she said, was “out of luck.”

Is the statute unconstitutional? Should Harrington share custody? Or is Hendrix, indeed, out of luck? Read source

Reading through the Hollinger – Hendrix case and contrasting it to the current lesbian case, only one thing is constant- that the Kansas state judicial system is not.

Another related story that can be read below, had a father in Kansas denied child support, in the very opposite fashion of what transpired in the lesbian case above. In the case narrated below, the court refused to give the father child support from the actual mother of the child, despite his dire financial situation.

My husband is the custodial parent. In June, he was awarded primary residential custody, while the mother received visitation. The judge chose to waive child support at that time, and told my husband he could “file later” to have it changed.

In November, my husband filed for a modification because his ex repeatedly refused to help support their daughter. Originally, his requests were for school clothes, winter clothing, and things like that. After she refused, he filed. He was granted a hearing in December.

The judge denied his petition and allowed the mother to get away with not paying support, citing that there was not a “change in circumstances” from the date of the original order.

Life in our household has become strained due to financial issues. We don’t know where to turn next.

We are still paying off lawyer’s fees from the custody battle that took over a year, while the judge granted the mother every leniency possible. The one time my husband made a request, it was denied. Before this, they had 50/50 custody.

According to Illinois law, neither the parents or a court can waive the child’s right to child support.

To me, this is illegal and a violation of his rights both as a father and as custodial parent. It is discrimination because if the situation was reversed, the mother would likely have been granted child support from the beginning. Link: http://www.child-support-laws-state-by-state.com/father-denied-child-support.html