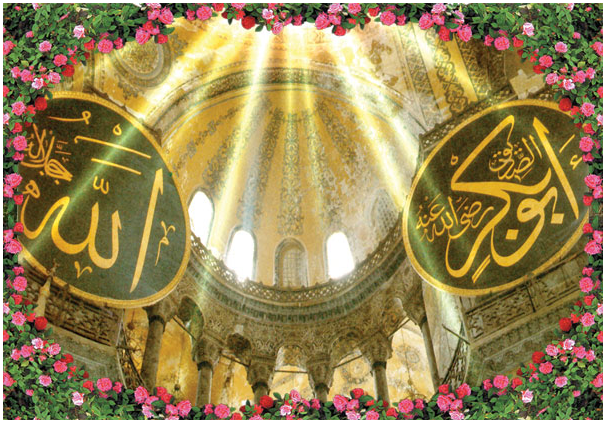 Blood feuds among Arab tribes, social and economic conflicts that could erupt at any moment among Jews, Christians and Arabs who have not embraced Islam yet: 14 centuries ago, the lands of Medina were far from peace until Prophet Muhammad graced this beautiful city with his presence and made the most significant agreement of history.

Back then, there were mostly pagan Arabs, Christians and Jews living in and around Medina. A feeling of resentment, anger and hostility was prevalent in their relations not only with other groups but also within their own. An atmosphere of conflict and war was going on for over a century in the lands of Arabia. When Prophet Muhammad graced Medina, the city was in a state of social dispute, inner conflict and political instability, much like today’s Middle East.

In such an environment, our Prophet brought the parties together, got their opinions and suggestions and drafted the Charter of Medina following their consent. Through this charter, he bound the people of Medina’s cosmopolitan structure together for the purpose of establishing social unity and peace. He brought about a ground of reconciliation among more than 100 groups, sometimes through letters and sometimes by talking to them in person. British historian Arnold Joseph Toynbee describes the importance of the social union that our Prophet established in these words: “…Arabia that had never before obeyed one prince, suddenly exhibits a political unity and swears allegiance to the will of an absolute ruler. Out of the numerous tribes, big and small, of a hundred different kinds that were incessantly at feud with one another, Muhammad’s word created a nation”.

The Charter of Medina was the beginning of many things in world history. This charter signed in 622 AD is the founding constitution of the first Islamic state. It was the first pluralistic and democratic constitution in history; it brought a democratic and peaceful system which was unprecedented in the Arabian Peninsula to a community consisting of diverse races, religions and tribes. People of Medina, comprising numerous rival tribes, came together for the first time and turned into a society where freedom of religion, pluralistic democracy, political union and peace ruled. The Charter of Medina was a turning point in history in terms of introducing and protecting the rule of law and fundamental rights and freedoms. Moreover, these were not established by force, but by receiving the consent and assent of parties.

When it comes to constitutions, the first thing that comes to many people’s mind is the Magna Carta — the Great Charter of Liberties. However, under the leadership of our Prophet, the Charter of Medina was written 600 years before the Magna Carta. Although consisting of only 47 articles, it accomplished the objectives of modern and advanced democracies 1,400 years ago.

The Charter of Medina is predicated upon freedoms, not oppression; upon equality, not superiority; and upon right and law, not power. This charter guaranteed each individual in society the freedom of choosing the religion he desired and living and worshipping by his own belief without any pressure whatsoever. It ensured the freedom of faith and conscience, which is one of the key elements of secularism. Article 25 of the charter, including the expression “The Jews of the B. ‘Auf are one community with the believers (the Jews have their religion and the Muslims have theirs)…”, underlines a comprehensive freedom. Article 16 reads: “To the Jew who follows us belong help and equality. He shall not be wronged nor shall his enemies be aided.” After his time, the companions who maintained this attitude of our Prophet granted this right to Berbers, Buddhists, Brahmans and others like them; thus, disputes could be solved easily and a state of peace and justice was preserved.

The charter allowed each group the complete freedom of practising their own law but an offender would not be protected by any group. For example, it is stated in Article 13 that the offender shall be punished with no regard to his social status and the victim shall be protected: “The God-fearing believers shall be against the rebellious or him who seeks to spread injustice, or sin or animosity, or corruption between believers; the hand of every man shall be against him even if he be a son of one of them.”

Parties to this charter would help each other, support each other and live in peace and unity with all the other groups in Medina. The disputes between parties would be settled by the arbitration of our Prophet, accepted by all groups as the fairest person.

The Charter of Medina guaranteed the legal rights and freedoms of all individuals regardless if they were Muslim, Jew, Christian or pagan. Despite the harsh oppression and cruelty of the pagans of Mecca, our Prophet maintained a merciful and protective attitude towards them and even set this as a provision in the constitution, as the purpose of Islam is to bring peace and love to the whole world. With this constitution, Prophet Muhammad applied the Quran’s attitude of love, respect, compassion, peace and freedom for all mankind regardless of their beliefs.

Some people think that Islam and certain values such as democracy, secularism and freedom of thought cannot co-exist. Those who have led to this wrong prejudice in the Western world are fanatics that have emerged in the name of Islam but who are, in fact, acting in line with superstitions, fabricated hadiths and non-Quranic beliefs. It is this bigoted mindset which is completely incompatible with the Quran, which does not allow any living space for any idea other than its own radical ideas, which regards women as second class and generally makes life unlivable. The cause of suffering, terror and conflict today in the Middle East and in some other Islamic countries is the radical ideology of bigotry.

There is no compulsion in Islam. There is perfect freedom of religion, belief and thought in the Quran. The verses “There is no compulsion where the religion is concerned” (Quran, 2:256); “You have your religion and I have my religion” (Quran, 109:6); and “Say: ‘It is the truth from your Lord; so let whoever wishes have faith and whoever wishes disbelieve’” (Quran, 18:29) of the Quran are the summary of secularism.

With the Charter of Medina prepared by Prophet Muhammad, a model of pluralistic society was realised on the basis of religious, cultural and legal autonomy and a century-old conflicts among groups of different beliefs and cultures came to an end. If considered from today’s perspective, the Charter of Medina would be a perfect starting point guiding Muslims to a peaceful, fair, understanding, affectionate and benevolent social model both in the Western world and in the Middle East, suffering from a tragedy continuing for more than a century, and the Islamic world in general.