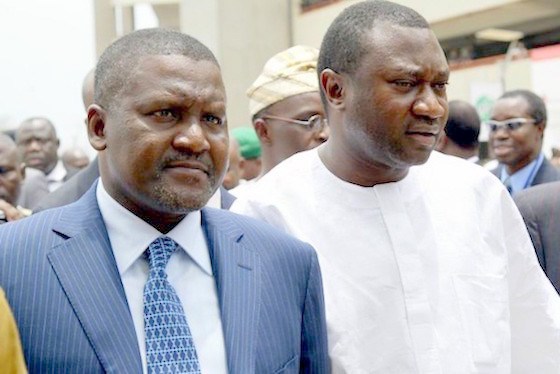 The Coalition of Northern Groups(CNG) has described Africa’s richest man, Alhaji Aliko Dangote, as more of a treasury looter than a businessman. They also referred to him as a moral liability to the North.

Recall that Dangote last Wednesday described the Arewa youths who gave the quit notice to the Igbo as jobless youths seeking relevance.

In a swift reaction,  the coalition of Arewa Youths in a statement signed by its spokesman Abdul-Azez Suleiman slammed Dangote for casting aspersion on them.

The statement read, “The Coalition of Northern Groups would ordinarily not have bothered to respond to inconsequential criticisms coming from people like Aliko Dangote but for the fact that they may assume some importance within the context of northern leadership.

“We all know that Dangote and all those that appear uncomfortable with our Kaduna Declaration are those who thrive from condescending against northerners and the northern values. They represent a pack of scavengers who would readily negotiate the general interest of their people in order to cover up their dirty sources of wealth and fame.

“In particular, Dangote has never been and can never be among genuine northern patriots and therefore his support for, or opposition to anything that tends to serve the interest of the region and its people is inconsequential and is not expected.

“If anything, Dangote is no more than a moral liability to the cultured north having become the final destination where every corrupt government official dump their public treasury loot. He is therefore morally liable along with other Igbo accomplices for the economic hardship wrought on Nigeria in the past 25 years.

“We are therefore not surprised that Dangote should openly oppose this course that is endorsed by all well-meaning northerners and the likes of Professor Ango Abdullahi and several other secular and religious scholars of note.

“This is because Dangote is never known to have had any form of conventional education or religious training before venturing into dubious money-making schemes.

“He is also not expected to support anything North because in the pursuit of wealth, he has come to develop an endemic hatred for his northern kith which exposes why, as the richest man in Africa, Dangote can only boast of a very negligible presence by way of investment even in his birthplace, Kano while citing more than 70% in the South.

“Most importantly, we are very much proud that we are only “jobless’ as claimed by Dangote, but then, none of us has the record of ever being involved in drug peddling or currency counterfeiting.

“All our lives, since childhood, we have never been found wanting in any money-worshipping venture to the point of criminally peddling hard drugs and, or forging hard currency.

“We are also happy that the Kaduna Declaration has finally exposed the bankruptcy of many northerners such as Dangote who have turned traitors after riding on the goodwill of the region’s past leaders who sacrificed everything to bequeath a fair environment to future generations.

“Dangote and his likes should note that it is now a different North from the one they at will exploit with their cutthroat entrepreneurship.

“They should also note that the Kaduna Declaration is a strong and meaningful statement that cannot be wished away by the ranting of the traditional exploitative bourgeoisie.

“We nevertheless challenge Dangote and other northern traitors to dare test their popularity against the Kaduna Declaration for them to really know how insignificant they are.

“And we challenge Dangote to test the political waters by making the mistake of accepting the well-known plots by Olusegun Obasanjo to get him to run for the presidency; that is when he would know the true cost of betraying one’s own people.”