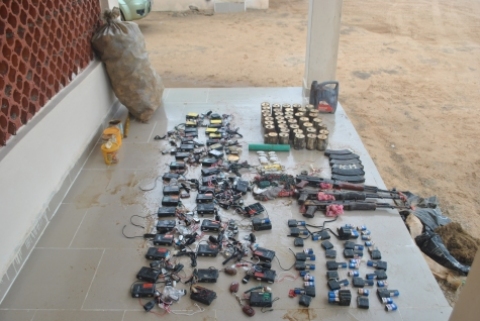 The Joint Task Force (JTF) in Maiduguri, Borno State, says it has recovered several weapons and equipment from the home of a top Boko Haram commander.

JTF spokesperson, Lt.Col. Sagir Musa said in a statement that the Task Force’s ‘Operation Restore Order’ made the recovery in the Bulunkutu-Lawanti area of the metropolis during a follow-up operation in the residence the man, whom he described as “a wanted key commander of Boko Haram sect.”

The statement did not say whether the man or anyone else was arrested.

“Following the operation which was carried out at the early hours of yesterday, large cache of weapons which include 3AK 47 rifles, 306 x 7.62 mm special ammunition, 39 primed improvised explosives devices cans, and six empty magazines were recovered,” the statement said.

The sect is yet to respond to the recovery as claimed by the JTF.