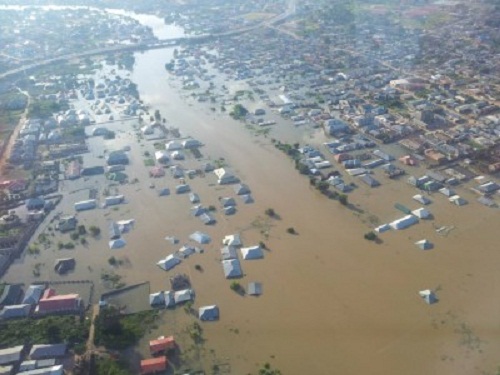 Since the Makurdi flood displaced many people, some concerned Nigerians, agencies, international and local organizations among others have shown concern and made donations to the flood victims at the various IDPs camps in Makurdi.

I appreciate Ukan Kurugh, Dr. Elijah Terdoo Ikpanor, Kula Tersoo and all those who are voices of the victims and the roles they have played so far have brought commendable and potent impact on the victims.

According to Mr. Herbert Vander Lugt, the director of a disaster relief agency told about a man who had achange of heart after the flood that devastated Grand Forks, North Dakota, in 1997. The man had been strongly opposed to the request of a church to build near his house, but he relented when he saw the truck loads of food and other supplies sent by Christians. He said seeing what believers did with theirmoney “outside the walls” of the church building changed his mind.

We are to realize that we have to devote our lives to doing good no matter how little the present dividends, knowing that God will keep his word.

As Christians and Muslims, we should be generous not only because our compassionate action may ease the plight of those in need, but also because God rewards generosity.

After the great Chicago fire of 1871, D.L. Moody went to New York to solicit funds for its victims. When he arrived, he was introduced to a wealthy man who was reported to be very generous. Impressed by the great need in Chicago, he gave Moody a check for a great sum of money. He then directed the evangelist to several other men in the area, who also gave large contributions.

When Mr. Moody was about to leave, he shook the benefactor’s hand and made this parting comment: “Ifyou ever come to Chicago, be sure to call on me. I’ll return your favour”. The man responded, Mr. Moody, don’t wait for me to come. Do it to the first man who comes along”. Commenting on that experience, Moody said, “I never forgot that remark. It had the ring of the true Good Samaritan”.

The man was the kind of giver who pleases God. Moved by the needs of others, he willingly gave of his means to alleviate their suffering. He didn’t give to gain attention or to satisfy his ego. Nor did he give “grudgingly or of necessity,” but cheerfully.

According to Dennis J. De Haan, there was an attractive front-page news in the local paper in the United States. The article told of two wealthy businessmen who had given $149 million to charitable causes over a period of 8 years. That’s a sum worthy of headlines.

But let’s keep this in perspective. These men and their foundations are doing much good for the community and for the cause of Christ around the world. And we are grateful that God blesses some people with wealth to benefit others. But giving of this magnitude doesn’t necessarily involve much personal sacrifice.

The amount a person gives isn’t as important as the sacrifice behind the gift. The Lord is pleased when giving is not measured by amounts; our attitude and sacrifice are what He really counts.

I am appealing to all those willing to donate and support the Makurdi flood victims to give cheerfully. The greatest blessing comes to the one who freely gives and expects nothing in return.