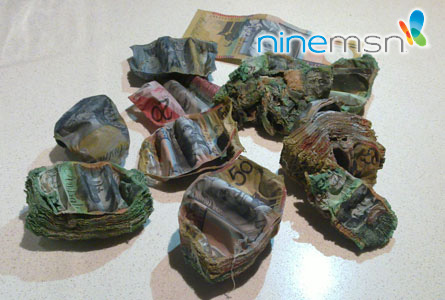 One man probably has learned a costly lesson about where he hides his cash.

The unidentified man from Sydney, Australia, sold his car last weekend. The $15,000 (approximately $15,652 in U.S. dollars) in proceeds was earmarked for his mortgage payment and other bills, according to Australian media. Opting not to squirrel away the loot in a mattress or bury it in his backyard, he decided to hide it his oven, which rarely gets used.

Bad move: Turns out, his wife decided to use the oven that day, preheating it for chicken nuggets and, yes, cooked the cash.

“It was everything I had,” he told the news station. “I’ve got nothing to my name. That money was supposed to go towards my mortgage.”

His wife was equally distraught and, reportedly, could not stop crying when telling her husband after she discovered what happened: The cash was baked into a colorful burnt mess.

The man reached out to his lender and the Reserve Bank of Australia for help.

The Reserve Bank advises people to take damaged currency to a bank. According to the Reserve Bank policy, “if several pieces of the same banknote are presented, the Reserve Bank’s policy is for each piece to be worth a share of the value in proportion to its size… The combined value paid should be the face value of the original banknote.”