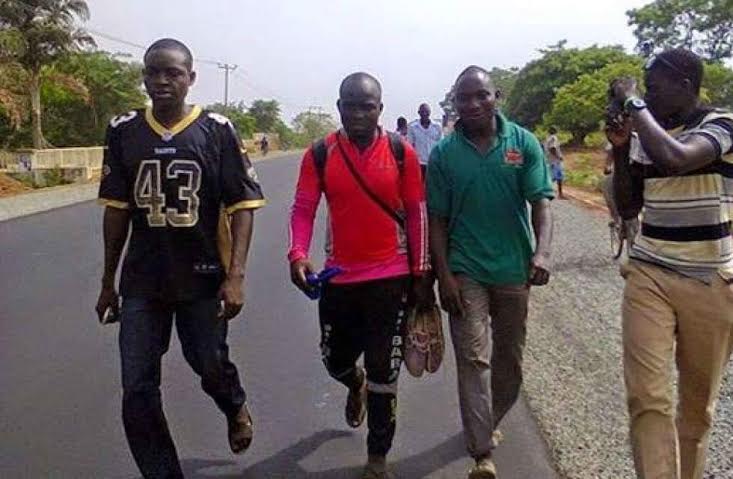 He kept his promise! We pray GMB keeps his too!

Suleiman Hashimu, the  guy who promise to trek from Lagos to Abuja should Buhari win is fulfilling his promise and moving quite fast on his twos. After a several days journey on foot he arrived Bida earlier today en route to Abuja. He was received by Etsu Nupe, HRH Alhaji Yahaya Abubakar. 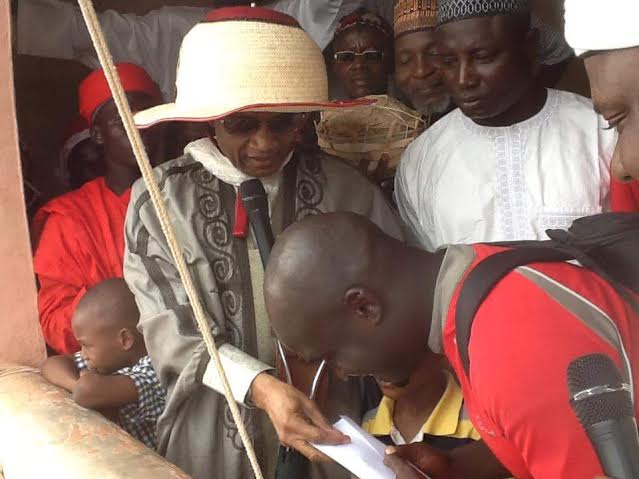 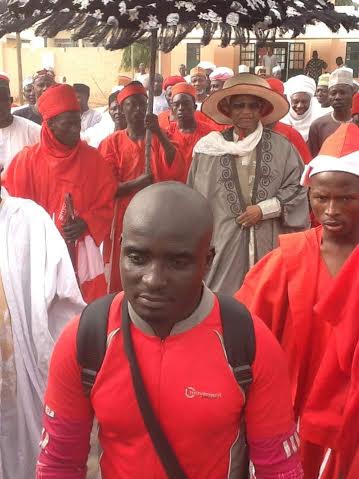 Suleiman Hashimu or ‘The traveller’ as I prefer to call him is an indigene of Katsina state, Funtua to be precise. He was born in Osun state but lives in Ibadan.

The traveler promised two years ago to walk from where ever he is to the capital of Nigeria, Abuja if General Muhammadu Buhari wins the election in 2015.  BBC Hausa, Voice of America and Aminiya (a Hausa Mgazine) interviewed him.

He was in Lagos when Buhari was declared the President-elect of Nigeria. He left Lagos at about 5am the next day and arrived Ibadan around 6pm. He went to get a police report to allow for the smoothness of his journey but couldn’t wait and so, the D.P.O. gave him his phone number. Despite several discouragement from friends and at the same time, inspiration from friends and loved ones; he continued from Ibadan to Oyo. Then from Oyo to Ogbomoso.; And from Ogbomoso to Ilorin with much hospitality at every stop.

At Ilorin, some people escorted him for some miles and he stopped at Oloru. Oloru, to border’n Sa’ada and then to Jebba. He received so much hospitality from Jebba and unlike other villages he met a lot of people who had heard of the traveller. About 20 people set off with him from Jebba and after some miles, about 18 went back but the remaining two were determined.

They met with armed robbers close to Makwa and luckily, he already met one of them in Jebba and he even gave him 200 Naira for pure water. The robber told his colleagues that he was going to see Buhari and he gave him 2000 Naira and then slapped the two men with him. He continued his journey from Mkwa to Kudu and then to Kutigi. He is currently in Kutigi and will continue his journey to Bida tomorrow by the grace of God.

I asked him about his encounter with the different people and he said it was remarkable. Actually he gets more determined to move on from the people. He was even treated like a King in a village in Niger. They sang tribal songs he didn’t understand and travellers stop to provide him with food and company along the way. Most of them are familiar with him because they travel the same route daily.

Sometimes up to 10 cars would stop to converse with him. News travelled with the public transports to different places on his route and people from several cities, towns and villages on his route would call to check up on him and inquire about his journey.

He doesn’t know for sure if Buhari knows of him but several of his support organizations do. He intends to reach Abuja by 27th of May and celebrate with the new president at his inauguration ceremony.