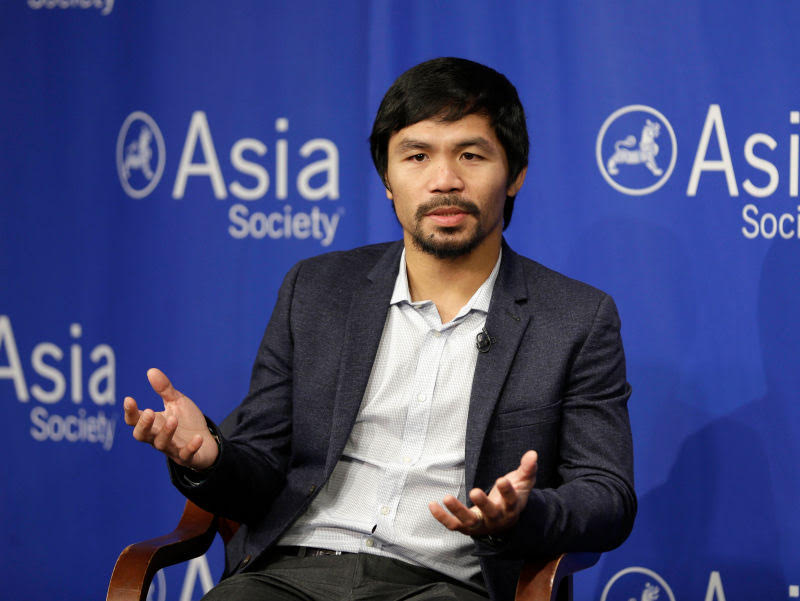 The Boxing legend, Many Pacquiao, has built over 1,000 houses for poor #Philippinos in his home town. More than one thousand poor families will benefit from the project. #Pacquiao, who is a born – again #Christian, said:”As faithful stewards of God’s grace in its various forms, each of you should use whatever gift you have received to served others.”

This is true humanity & it shows how religion influence people to do good. All #Monotheist religions preached goodness & righteousness which are integral compositions of the message sent by God to all His #Prophets and Messengers.

Unfortunately, with the passage to history & time, extremists & ungodly pretenders infiltrate and contaminate the pure messages of religion & you see bloodthirsty monsters wearing the garb of religion as manifested today by Zionists killers & Wahhabi murderers.

It is important to note that even some #Atheist who do not believe in the existence of God do good and righteous deeds. I once read of an Atheist multi-millioner in #China who went to his village and destroyed all the village and erected modern structures for all the families. He built hospitals, schools, market and recreation center for the people of the village. This is the positive side of humanity that we should cherish, encourage and uphold.

But the importance and advantage of religion is that it preaches goodness, kindness and righteousness. Humanity is not how much time you spend in the Mosque, Church, Synagogue or African Shrine for those who practice African religion, humanity is the care and concern you show to your fellow human without regard to religion, tribe or race.

As a #Muslim my best and ultimate example is Prophet Muhammad Al-Mustapha ( sa ) & I will narrate a historical event that showed his humanity. When he started his call at Mecca, the hostility and opposition to his call was great. One day he saw an old woman with a heavy luggage and she was struggling with it. The Prophet ( sa ) on seeing her rushed and took that luggage from her and she led the way to her home. On reaching her destination the woman was so happy with the kindness of the Prophet ( sa ) that when the Prophet ( sa ) was about to take his leave she told him that she has a very important advice for him. She came closer and told the Prophet ( sa ) that there is a man in this town whose name is “Muhammad” who brought a weird religion, whenever you see him please do not listen to him! The Prophet ( sa ) smiled and said “I am Muhammad”. The woman was shocked and that was how she accepted his Islam.

This is the kind of #Islam I desire, the Islam that uphold all human values and save lives not destroyed lives. It is important to note that when the Prophet ( sa ) saw that Old woman, his first consideration was not her religion, his first consideration was here is an Old woman who needed help. Unfortunately today there are people who called themselves “Muslims” who will cut off her head just for her religious inclination.

The above action of Manny Pacquiao gladden my heart and I have to share his story with Friends. We hope for more people like him in our societies who will ease the sufferings of the poor, downtrodden, homeless and the barefooted.