The seeming unity between Radio Biafra and MASSOB in the news today is far from being reality but is more of a unity of role to save both groups’ PDP paymasters, evidence suggests. In the piece below, Nnamdi Kanu while attacking Ralph Uwarurike and his MASSOB, reveals that Uwazurike works for the PDP. Both groups only started causing trouble in Nigeria after the PDP lost.

In March this year when it was apparent former president Goodluck Ebele Jonathan would lose his re-election bid, Nnamdi Kanu was declared wanted by the Nigerian police as he was caught being supplied AK47s in Imo state. At the same time MASSOB leader, Uwazurike, Asari Dokubo, Al-Mustapha and others were having ng emergency meetings suspected to be deciding on militant disruption in the event of an APC victory.

Till Nnamdi Kanu’s incarceration for terrorism and terror sponsorship-related charges, the radio director did not miss a day to reign curses on MASSOB and its leader, Uwazurike. Both groups are sworn enemies who have promised to kill each other. In fact even worse already, Uwarurike’s MASSOB has left torture marks visible on Kanu’s body and urinated and spat on him while they “kidnapped” him in December of 2009 according to Nnamdi Kanu as posted currently still on the Radio Biafra facebook page (https://www.facebook.com/radiobiafra/posts/177429002438426)

Below are interesting parts of that gross narrative of human barbarism between these groups who were quarreling over scam “Biafra passport” documents being sold to defraud unsuspecting followers. It is noted once again from the narrative by Nnamdi Kanu, real name Nwannekaenyi Kenny Okwu-Kanu, that the Council of Elders is the real head and founders of IPOB which Kanu is attempting to steal from them in a radio-coup. That admission is made again here as in audio as we have earlier released. In the narrative Kanu also admits there is a Biafran army. Read Kanu:

“Kenny Okwu-Kanu = I was kidnapped by Uwazuruike on the 19th of December 2009. Uchenna Madu who is Massob Director for Information led the kidnap party. They were told they were going for a rally but instead chose to come an kidnap me.

“Uwazuruike your master came to see me in London in the summer of 2009 and asked me to print Biafran Passport for sale. I told him no. I introduced him to Coleman Asomba in South Africa to coordinate our agitation but when he Uwazuruike got there they concentrated on printing passports. I also agreed with your master Uwazuruike that we should return to the ways of our ancestors which is rulership by an Elders Council which he agreed in London but did not implement when he got home. I am giving you insances so you will ask him if you can find him. Uwazuruike rejected the involvement of Igbo intelligensia and failed to allow consultation to happen between us and Igbo elders. I received information through a source at Aso Rock that your master sold out the struggle to Nigerian Government and the deal was brokered by Senator Chukwumerije. I called Uwazuruike to tell him the information I received and he denied it. I travelled to Owerri with two of my members to confront him with the evidence we had. We went to his Works Layout palace where he agreed to meet us but he wasn’t there. “After visiting PH to see Massob members I returned to London. People started calling Radio Biafra to enquire if the new Biafran passport was a legal tender as BBC Africa had carried the news. I gave them an honest opinion that Biafran Passport printed could not get them into the mythical 99 countries that recognised Massob. The criminal elements among you started calling me to threaten me and you wrote a letter to my father saying you had authority from Nigeria to declare me wanted. I have the letter. I ignored you and came home where you hired 10 buses led by Uchenna Madu to come and kidnap me. Yes you tore my clothes, spat at me, even had a mock trial to assertain the whereabout of the Biafran Army that was then camped at Abakpa. 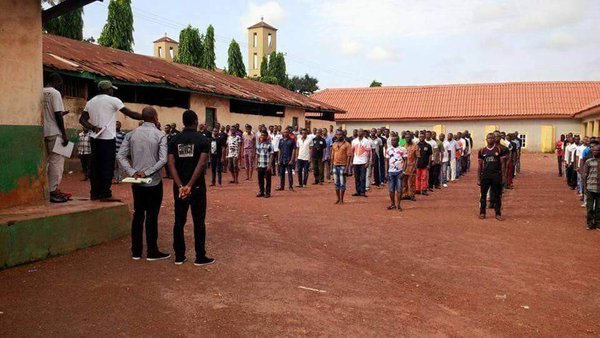 “You tortured me to force me to reveal who was sponsoring Radio Biafra and I told you that I used my savings to fund it which was the simple truth. During my captivity at Okwe, you told me how you kidnap people in Igboland. You mentioned a few prominent names I will mention in my book. You hungry ferrals stole my clothes, wrist watch and money. Some of you spat at me, some poured urine on me. You fooled them into believing I was a traitor to cover the fact that you people are the traitors. “I knew you will come up with this which confirms in your own words that you kidnapped me then later Pascal Okorie and also Benjamin Onwuka. When massob released me from Okwe, I took a taxi to Umuahia and was receiving attention at Ojukwu Bunker Guest House when SSS men came and arrested me. ..It was Uwazuruike himself that told SSS that Nnamdi Kanu of Radio Biafra he kidnapped had been released and if they wanted to question me. I was arrested yet again by armed men of Nigeria SSS. When I got to their headquarters at Ojike Street Umuahia the SSS Director’s phone rang. To my astonishment it was Uwazuruike enquiring if the information he gave them was correct. I was amazed when this Hausa man looked at me and said I was wasting my time fighting for Biafra. He showed me his phone and there Uwazuruike’s number was. I kept asking myself what type of freedom fighter would be so friendly with his oppressor. It was at that point I realised that Uwazuruike was working for Nigeria all along… Go and do your research. You have the video of my kidnap and ordeal, I challenge you to release it. That way we know we know who is lying. The worst mistake massob made was to let me leave Okwe torture chamber alive.” Read full on Radio Biafra facebook page: https://www.facebook.com/radiobiafra/posts/177429002438426

As MASSOB campaigns for the release of terror suspect Nnamdi Kanu, it is obvious in intelligence circles that Kanu is the pawn, who was sent by the PDP as a sacrificial lamb who deliberately handed himself over to the Nigerian authorities in Lagos, with the plan that his millions of dollars financed radio station will aid the triggering of rebellion to save the corruption-accused party members. The Jonathan government allowed Kanu set up several FM transmitter posts across Nigeria with a massive transmitter in a container being allowed into the country; which was recently seized by the DSS at Kanu’s village as we exclusively reported last week.