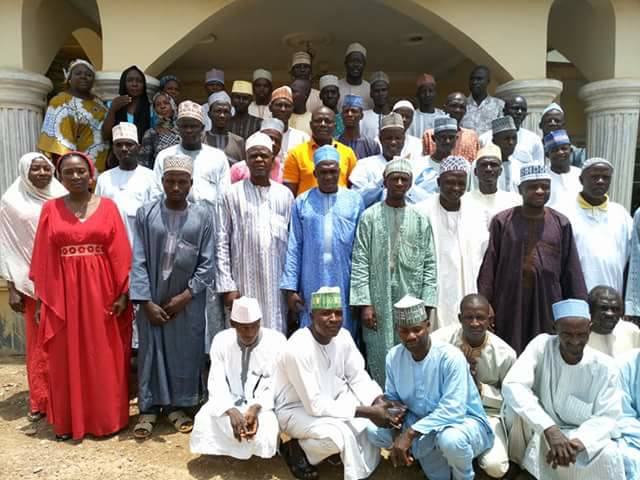 Maulud;  Christians scholars has  appealed To Muslims world-wide to use the celebration in promoting the Teachings of the holy prophet{PBUH} and  inter-religious dialogue.

As Muslims round the world commences Maulud celebration, which is  the Prophet Muhammad’s(Peace be upon him)birthday ,Nigerian Christian Clerics has felicitate with Muslims world wide ,and urged them to used the celebration period  in peace Building and promote interfaith dialogue  ,and inter-religious tolerance with better understanding among Nigerians ,in other  to promote the teachings of Islam

Pastor yohanna Buru ,the general overseer of Christ evangelical and life intervention ministry make the call when he received a delegation of various groups of Muslims Youths,and Imams at his resident  sabon tasha kaduna state north-western Nigeria on a courtesy visit.

The visit is aims at  promoting Christian –muslims relationship in the state, so as to boost more  peaceful co-existance and inter-religious Dialoque among differents faith base organization in Nigeria,in other to end all forms of ethno-religious ,political crisis bedeviling peace stability in the state.

Buru said ,Muslim should know that , Maulud celebration is not for muslims alone,because the holy prophet is for every one ,as he preaches peace love and unity through out his life for humanity and for mankind.

The Christian clerics pointed out that in each and every year many Muslims organization In and outside Nigeria always invite him to come and participate in Maulud celebration,and also delivered a lectures on Christian and muslims relationship in Nigeria,where he meet with International interfaith scholars in IRAK,IRAN,JORDAN,Afganistan Saudi arabiyya, with other muslims nation to deliberate on the importance of peace and unity for mankind.

“Adding that I have been participating in so many Maulud celebration in Middle –East with some muslims Arabs with the aims of Using the Maulud period in promoting religious Tolerance among different faith base organization in the Arabs countries.

Buru said,”last year I attended over 80 different maulud celebration that I was invited in both kaduna and some part of the 19 northern state,and I took some of my Evangelist and pastors with Reverend to join me in going to visit most of the places our muslims brothers invite us to attend the maulud celebration.”

Buru further said,In each and every year His organization”Peace revival and reconciliation foundation of Nigeria”do usually organize a yearly Maulud celebration and a Public lectures for both Nigerian Muslims and Christians,so as to promote religious tolerance and for Christians to also learns more of the teaching of the holy prophet;so as to learn how to stay in peace and harmony with one another.

Buru added that All Muslims world wide should understand that “the celebration of the birth of the Prophet Muhammad(PBUH) goes beyond muslims alone, because the prophet is for every human being on earth ,not for muslims alone,and that he has been preaching peace through out his life,and that has attracted  many Christian learnt many thing about his teachings of islam and muslims.”

“I read many islamic Books and Hadith  about Prophet mohammed”PBUM” and I like him personally,that is why I also celebrate his birth day with other muslims,and I will continued reading many Books about him.”

Buru says,”we must remember that we are from one family”Adams and Eve,”we are brothers and sisters” believe in our Holy scriptures “Bible and Qur’an” and believe in all believe in life after death ,then  we must be our brother keeper.”

Buru said,in each and every year,During Christmas celebration ,over thousands of Muslims do usually visit me at home to celebrate with me, pointing out that Christian world wide are happy seeing muslims coming to join Christian in celebrating Christmas and New year together.

Pastor Buru then calls on ceaseless prayers by  both muslims and christians across the world in other to promote the culture of peace and unity and religious tolerance.

Buru concluded by saying” I am begging on all  Muslims all over the planet to be inviting Christians to all Maulud celebrating ,so that more Christians would learnt many thing about islam,and that would help in promoting religious tolerance and better understanding among differents faith base organization world wide.”

In his remarks, Alaramma Abdulrahman Mohammad Bichi,a muslim scholar ,expressed satisfaction by the attitude of some christians clerics that showed love and best wishes to the muslims umma on the celebration of their maulud ,adding that both muslims and christians have one origin which is Adam and Eve,and we all worship one God,and believed in meeting the creator One day.

The muslims scholar then wished christians round the world merry christmas and happy new year in advance,while assuring Christians to join them in celebrating this year Christmas.

He called on government to provide adequate security to all churces,Parks,markets and garages in other to avert terrorist attacks, warning Youth on the dangers of drugs abuse and careless driving on high ways

Alaramma also concluded by saying “we must let christians knows that, every Muslims loves jesus Christ,infact we loves him more than you the Christians.”