It will soon be two years since the Nigerian military, under command of Tukur Buratai in an overhanded reaction to protesting youth, hunted down, killed and secretly buried as many as 1000 Muslims across five distinct locations in Zaria.

Exactly one year ago, President Muhammadu Buhari assured international and local human rights groups of an “appropriate response” to the report by the Kaduna judicial inquiry into events that led to the deaths of genocidal proportion and government-admitted secret mass burials of December 2015.

In his only media chat, days after the December massacre, Buhari agreed that there was no justification for the number of civilians killed. His words;

“You can’t justify casualties on that scale, but to be fair on both sides you have to wait for the inquiry, and then you tell the families…”

But Buhari continues his life like nothing happened. Not a single soldier including those indicted by the panel set up on his instruction, has been dismissed or even suspended for the egregious atrocity.

There was no exhumation of the mass graves to count and investigate the bodies of the victims and give them a proper burial. Justice has been denied and postponed till “judgment day” by Buhari.

I shudder when I view images of the multitudes of paupers who celebrated Buhari’s return. Be they paid or not, I can only hope that they are illiterates who do not read the news and did not know of the events of Zaria and the similar massacre and secret burial of dozens in Onitsha that the state governor recently apologized for under intimidation by relentless Biafra agitators.

Does it take threats to the election of politicians to receive at least an apology from the Nigerian government?

At least when former president Goodluck Jonathan many who love Buhari loathe, killed the first three of Zakzaky’s sons, he had enough humanity to apologize after being called genocidal by many of us including Nasir el-Rufai. But Buhari won’t after killing three more of poor Zeenat’s boys. I hardly expect he will. After all, he never apologized after immorally killing the three men with retroactive laws in 1984.

Sitting flanked on both sides by the red, black, white and green flag of the Nigerian army, displaying his capacity as commander in chief of the armed forces, Buhari on Monday after a prolonged medical tour on tax payers’ money said “Every Nigerian has the right to live and pursue his business anywhere in Nigeria without let or hindrance.” No one owns those words more than the speaker, who denied Nigerian youth their right to their religious choices, right to protest, right to life and even their right to a proper funeral.

You may be so fanatically extremist, you dislike the type of Muslims those killed in Zaria are or the self-determination quest of pro-Biafrans, but it takes a great loss of sense of humanity and the fear of God to love those who killed them, secretly mass buried them and sentenced their families and loved ones to eternal pain without apology and denied earthly justice. 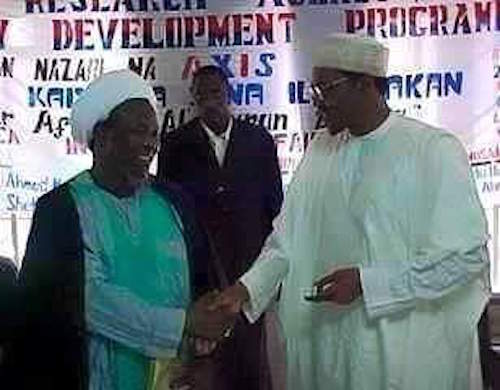 The window of repentance is closing on Buhari. Perhaps God will grant him 100 more years or perhaps 100 more minutes. It is in God’s hands, but being back on his seat in Nigeria, he has a chance to try to right the wrongs he has done that have invited the Wrath of our just God on Nigeria.

At this point, the only thing we can do is pray for Buhari. Pray for Allah(s) to have mercy on him.