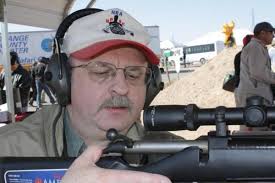 While today’s continuing coverage of the mass kidnapping of girls in northeast Nigeria includes the revelation that Nigerian security forces allegedly had advanced warning of the raid, the mainstream press is largely ignoring another critical aspect of the story, that residents in the Borno state apparently want the government to give them guns for self-defense against the militant Boko Haram group.

Locally, only KING5 News has touched this subject, and probably by accident. When reporter Rob Piercy interviewed Nigerian native Obafemi Idowu Wednesday, he noted, “What’s more, says Idowu, people can’t protect themselves. It’s illegal for anyone outside of the military to own a gun in Nigeria.”

Obafemi was described as a technology consultant. He was born in Chicago but grew up in Nigeria, KING reported. Obafemi said the fact that citizens are unarmed allowed Boko Haram thugs to “walk into your house, hold you up, take your children.”

A remarkably articulate fellow, Obafemi is not alone in his observations. Yesterday, Examiner traded e-mail with Dr. Peregrino Brimah, who had just published an open letter to Gov. Kashim Shettima of the Borno state.

In that open letter, which appeared on the ENDS (for Every Nigerian Do Something) website, Dr. Brimah stated, “Do you know that what has happened in Borno would never happen in any other state in Nigeria without the governor giving his people guns and a course in training so they can defend themselves? Your people are great warriors and Patriots. Let them defend themselves.”

KVI’s John Carlson discussed the situation Thursday morning during his drive-time broadcast, noting that what is happening in Nigeria could not happen if the people there had a right to keep and bear arms. He said this incident underscores the importance of the Second Amendment.

This case adds further credence to warnings about the United Nations International Small Arms pact that is supported by the Obama administration, but has little to no chance of being ratified by the U.S. Senate. Eighteen months ago, Alan Gottlieb, founder and executive vice president of the Second Amendment Foundation, raised alarms about President Obama’s swift move, within hours of confirming his re-election, to support the arms treaty.

SAF’s Julianne Versnel testified at the U.N. that self-defense is a human right. Northeast Nigerians now wondering whether they will ever be reunited with their daughters probably understand that better than bureaucrats, or even Nigerian President Goodluck Jonathan. He predicted yesterday that the mass abduction will be the “beginning of the end” for terrorist groups like Boko Haram.

A quicker end might come if Dr. Brimah’s appeal for arms to the Borno residents is successful. International hand-wringing over the actions of criminals is never quite as effective as being shot dead by an intended victim, or in the case of Nigeria, having a whole village of angry armed citizens open fire on outlaws trying to steal their children.

Dave Workman is an author, senior editor at TheGunMag.com, communications director for the Citizens Committee for the Right to Keep and Bear Arms, award-winning outdoor writer, former member of the NRA Board of Directors and recognized expert on Washington State gun laws.