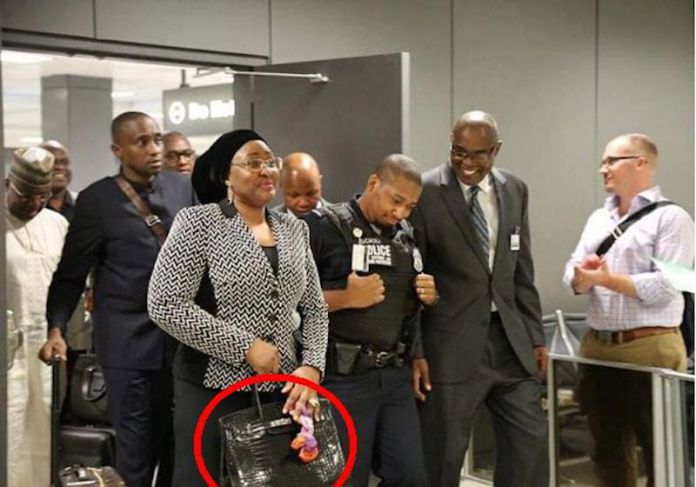 A black crocodile skin Hermes Birkin handbag toted by the wife of the president, Mrs. Aisha Buhari, has caused a social media storm, as Nigerians on Tuesday took to different social media platforms to express their mixed feelings.

Mrs. Buhari was spotted with the 35cm Porosus Crocodile bag, which is estimated to cost anywhere between $50,000 and $300,000, at the airport in Washington D.C., when she arrived the United States Wednesday for some engagements.

A Hermes Himalayan Crocodile Birkin bag was auctioned for $432,000 recently.

The news, which was broken by an online media, The Signal, tweeting from @thesignalng, set the Twitter-sphere ablaze with the discovery.

“Further checks by Signal on Thursday revealed that the exact pink version of Aisha Buhari’s Hermes handbag was auctioned in 2015 for $222,912 (N86,935,680) at a Christie’s auction in Hong Kong.”
Given the economic recession the country is currently facing, the news of Mrs. Buhari toting the Crocodile Gold Hardware bag provided fodder for controversy.

While most on social media expressed outrage at the cost of the bag, there were others who supported her for being stylish, while they were those who claimed the bag might not be the real version.
Of course, some recalled that Mrs. Buhari has always had taste for expensive things, alluding to the expensive Cartier Baignoire Folle 18-carat white gold estimated to have cost about N15.75 million ($50,000) which she wore at her husband’s inauguration in May 2015.

According to one Nene, “Do you honestly believe that anyone that can send their kids abroad for college can afford a $70K bag? How much do you think college costs?

“My parents sent all their kids abroad but they sure as hell don’t have $70k for a bag. That’s at least two years tuition.”

Also, Teni said: “There are different types of Birkin bags. The regular leather ones are about $10K but the croc version our first lady is crying is much more expensive.”

Tweeting, one Nicholas Ibekwe said: “Aisha Buhari has not broken any law. But it is morally reprehensible and disgusting for the president’s wife to tot a Birkin in a recession.”

Baba Oni said: “If the bag Aisha Buhari is carrying is worth N20m we will have to ask questions.
“How can Mrs. Aisha Buhari afford a handbag of N20m seeing they borrowed N27m for election form.”
However, on the side of Mrs. Buhari were many others who said the issue wasn’t about the bag, but about the opposition twisting it to their favour.

A Twitter user, identified as Olayemi said: “The gist is not that Aisha Buhari can’t travel to America again, it is now about that she’s carrying a Hermes bag. You will all be okay.”

Kayode Jason, also tweeting in her favour, said: “You Wailers can lie! Aisha Buhari bought the bag when dollar was N199 per dollar.”

Also concurring, one Mary said: “Nigerians should just let her be, ordinary people carry designers, she is the president’s wife of the Federal Republic of Nigeria.

“She had a life and a business before she became the first lady, and more so, most of these items are gifted to them.

“So what’s the big deal with her carrying a Hermes Birkin, she wore a Cartier watch on the day of swearing in (and) even before she became the first lady and that was a big deal for Nigerians.

“Ordinary Nigerian citizens go for summer holidays abroad with their family in this tight economy, so if they can afford such luxury, then why not.”

Taking the pity route, one Clara Jacobs said: “Aisha Buhari has the original Hermes bag and I don’t even have the fake… Sighs!!”

At press time, mum was the word from the usually active camp of the first lady.