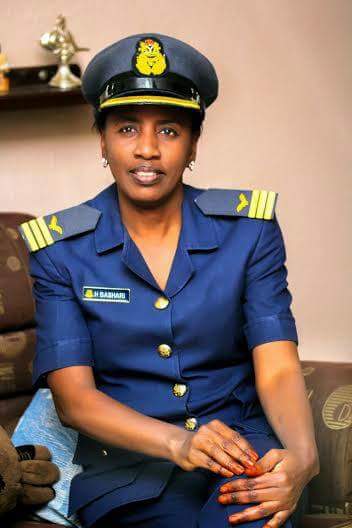 In Greek mythology, the natives of Amazon, a nation of women warriors near the Black Sea, are called amazons.

Wing Commander Hajara Bashari Umaru takes after the valour of the amazons and the heroism of the heroic Queen Amina of Zazzau.

As a heroine, she it was who blazed the trail and remained alone on the trail as others timidly shy away from the trail.

She, as a one-man army, set the pace, flew to the no-fly zone of male exclusivities, made a mark and a distant swathe.

Like Queen Amina, Hajara is, as the metaphor goes, a scarf in the midst of turbans. Starting as a non-commissioned officer in 1986, Hajara rose to become the first Hausa Muslim woman from a core Northern state to reach the rank of Wing Commander, equivalent to Lieutenant Colonel in the Army.

She has been to war in Congo, served at Ibadan, Kaduna, among other places within the country.

Hajara may be a ground pounder, as they say in the Air Force, but she remains in the medical hobby shop, giving the care – and of course the adrenaline – that boost the spirits of our troops to fight enemies.

Being a bright student, Hajara gained admission into Queen’s College, Lagos and St. Louis Secondary School, Kano. She would have chosen the former option but for her dad’s transfer to Kano.

After completing her secondary education, she joined School of Nursing, Kano. It was at that school that she took the decision to join the Nigerian Air Force, following recruitment drive for medical personnel.

“It was actually a dramatic situation. My mom Hajiya didn’t like it at all. And my dad pretends that he also didn’t like it in order to please her. But he actually encouraged me and respected my choice,” she told this reporter.

Hajara, a widow, hails from Birnin Kudu in Jigawa State.